Ben Krasnow runs the ‘Applied Science’ YouTube channel and he’s just built a scanning electron microscope. Ben has his priorities right, because the first thing he’s done with the microscope is to create probably the highest-magnification video ever of a record being played.

But first, for reasons we won’t go into here, he had to cut up a Johann Strauss record (he explains that he couldn’t bear to deface his ‘Switched On Bach’ LP) and coat it in silver. 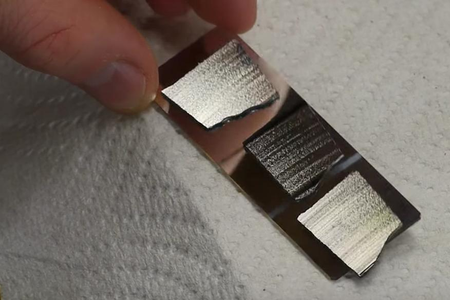 After a little more extremely clever scientific improvisation, Ben created a series of images of the stylus running along a record groove and stitched them together into an animation:

The full video is below. Be sure to watch to the end to see close-ups of CDs, DVDs and a fascinating item known as a ‘capacitance electrical disc’, which is basically a video version of a record from the 1960s that was a complete commercial failure.