These are the scariest pieces of music ever written 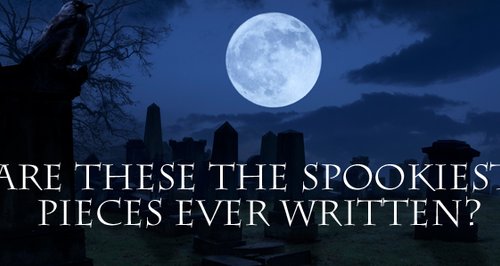 Classical composers really know how to make your spine tingle and your hair stand on end. Here are just some of the most terrifying pieces ever written. Read on… if you dare.

1 Danse Macabre (excuse us while we hide behind a cushion)

This is a bona fide horror movie in musical form – Death appears, summons the dead from their graves and leads them in a diabolical dance. There’s also a quotation from the Gregorian ‘Dies Irae’ (or Day of Wrath) chant for extra chilliness.

And the superbly chilling music in that clip was performed by the Orchestra symphonique de Montréal and conductor Kent Nagano, You can buy their new recording of the piece on Amazon here and on iTunes here.

2 In the Hall of The Mountain King

Grieg’s famous depiction of a cave full of trolls, gnomes and goblins builds from nothing to a devilish frenzy – a veritable pandemonium of demons. It’s a relief when it comes to an end, to be frank.

4 Toccata and Fugue in D minor

Bach’s iconic piece for organ opens with a diminished seventh chord which is always guaranteed to make you shiver. Played loudly and on a massive organ it is nothing short of flippin’ terrifying.

Before it was known as ‘that music from The X Factor’, Carl Orff’s Carmina Burana was straight-up one of the most sweaty-palms inducing pieces ever written. ‘O Fortuna’ – the famous opening – is all about the cruel whims of Fate. The poem that inspired the piece was written in the 13th century and includes the words “Fate is against me/ in health/ and virtue, / driven on / and weighted down, /always enslaved.”

This fantastical work is based on a poem by Goethe about a headstrong young apprentice who puts a spell on a broom so that he doesn’t have to fetch water all day. But then the broom won’t stop and a nightmare ensues. We’ve all been there. Just the thing for Halloween…

Dies Irae means ‘Day of Wrath’ and Verdi’s setting of this text is enough to turn your insides to liquid. Can someone wake me up with the Day of Wrath has been followed by the Day of Let’s Forget it and Be Friends?

This Symphony literally includes something called a ‘death shriek’. It looks like this: And it has to be one of the most frightening sounds of all time. So yeah.

Mozart’s opera about the womanizing Don Giovanni starts all jolly, but within approx. 1 minute our hero has killed a man whose daughter he’d just seduced. Because this is opera, this man (the Commendatore), reappears at the end of the opera to drag the Don down to hell. And Mozart wrote this ridiculously frightening music for the scene:

No list of terrifying music would be complete with some Hitchock movie music. The soundtrack to Psycho, by Bernard Herrmann, and the iconic shower scene in particular, has become the textbook for how to bring your audience out in goosebumps. And don't worry, this is just a clip of the music, no one needs the shower scene sprung on them…