10 classical pieces guaranteed to make you sob and cry uncontrollably 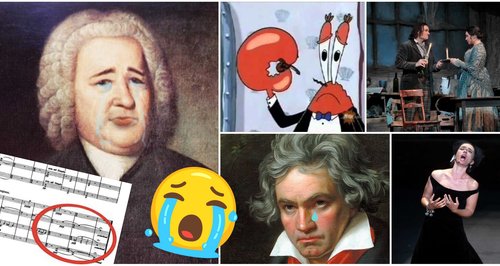 Get out the tissues… Here are ten of the saddest pieces of music ever written. You’ll be a mess, we know it. The master of the epic symphony waves goodbye with a slow, poignant, pianissimo fade into absolute silence. And just watch how the Great Claudio Abbado holds the concert hall in absolute stillness after it ends – so you’ll need to stifle your sobs a little longer.

This was not a symphony written by a happy guy at a happy time. In 1937 Shostakovich was in big trouble with the authorities and he poured everything into his fifth symphony, a piece that captures all the contradiction and sorrow of Soviet life. According to some reports, at the Leningrad premiere, everyone was in tears during this beautiful and expansive Largo, and the ovation at the end of the symphony lasted almost an hour. Horn, violin and piano – just the sound of these three instruments together brings a sizeable lump to the throat. Brahms completed the piece just after the death of his mother, so the music is gentle, lyrical, and haunting, especially in the first movement. Good thing he could hide all the emotion behind that massive Brahmsian beard.

Poor Violetta is in her bed, all tuberculosis-y. Her final moments are sad and dreamy – there’s resignation, heavenly visions and poignant reminders of previous, happy moments in the music. All ends in death and heartbreak, of course. Let this be a lesson to you, Alfredo: when you take love advice from your douche of a dad, it ends in tears for you, your beloved, and the entire opera house.

In a nutshell: Schubert’s song cycle starts with a man being dumped by the love of his life – and it goes downhill from there. Winterreise is a long journey through a desolate landscapes of lonely melodies, chilling figures and ominous crows. Just when you’re thinking 'this guy’s not taking it well', he comes across a a lone hurdy-gurdy player. They play this duet and walk off into the dusk together – presumably to die. It’s very sad. Late String Quartets – we’re tearing up already. When he penned these, the composer was almost completely deaf and he knew the end was near. He was done with big symphonic statements, and he was just writing for himself. The opening of his Quartet Opus 131 will have you reaching for the hankies. It’s a slow, expansive fugue and Richard Wagner, that famous ray of sunshine, described it as "the most melancholy sentiment expressed in music."

This would move even the most stoney-faced of Renaissance statues to tears. It’s a devastating musical picture - a woman laments her lost love over a slow, still ground bass as the male voices provide the atmospheric backdrop. Listen to her impassioned howls of 'amor' and feel the bottom drop out of your soul.

The great Baroque composer's Holy Week masterpieces are epic emotional journeys. This aria comes just after Peter denied knowing Jesus three times and went out to the garden for a bit of a cry. The text is “Have mercy, my God, for the sake of my tears” …and Bach sets it to a profoundly beautiful melody.

The great film composer chose a solemn, sighing motif to accompany Steven Spielberg’s Holocaust epic. There have been many special performances and arrangements of it - but here’s one that’s incredibly powerful. Even if you get through the first four minutes of this amazing performance without a tear, the ending will break you.

A sea-faring opera of good and evil, and the innocent Billy Budd is a wide-eyed novice brimming with optimism. He becomes the target of a sadistic master-at-arms, John Claggart, with disastrous consequences for everyone on-board the HMS Indomitable. By the time Billy sings his second-act aria ‘Look, through the port comes the moon’ the opera’s tragic end is heartbreakingly inescapable. Surely no one would be that cruel to poor Billy…