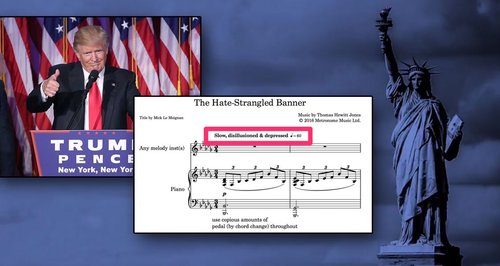 After Donald Trump’s shock US election victory, composer Thomas Hewitt Jones has re-written the US national anthem to reflect the new status quo.

Entitled ‘The Hate-Strangled Banner’, Jones’ new take on the anthem is a sombre, cello-led re-imagining of the final strains of the patriotic tune.

As you can see from the score, it’s been transposed to a minor key and slowed down hugely to create a more stark atmosphere than the more usual and triumphal versions performed at sporting events.

It’s not the first time Jones has tackled politics with his music, having composed a piece based on the tune former UK Prime Minister David Cameron hummed as he walked back into 10 Downing Street earlier this year.