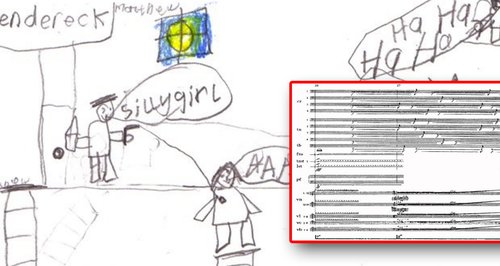 It turns out kids have some pretty lucid opinions about 20th century music, as this Reddit user found out.

A user calling themselves JohannYellowDog posted the following series of pictures to the /classicalmusic subReddit, with this accompanying note: “I played some pieces of 20th / 21st century music for kids. I asked them to pick their favourite piece and draw a picture.”

As you can see, Penderecki’s ‘Threnody to the Victims of Hiroshima’ provoked the strongest reactions among the 7-year-olds. The notoriously heavy and emotionally shattering work was written in 1960 by the Polish composer.

Since then it’s become an iconic work thanks to its strange texturing of string parts and the deeply-felt resonance of the subject matter.

Many of the children’s drawn reactions to the piece were depictions of extreme violence and misery, with some depicting murders. Other pieces immortalised by the drawings included works by Charles Ives, Joby Talbot and John Adams.