These violins are made from spiders’ silk, and they sound beautifully mellow 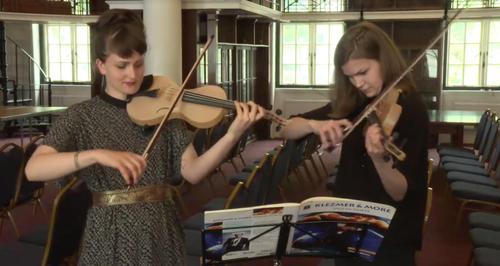 An engineering student from Imperial College London has built a violin with a composite that incorporates spiders’ silk. The new material could allow the acoustics of instruments and sound equipment to be customised with a degree of control that is difficult with other modern material such as carbon fibre.

Luca Alessandrini, a postgraduate from the Dyson School of Design Engineering at Imperial College, made his violin out of a mixture of silkworm silk and resin, impregnating the top side of the instrument with three strands of golden silk, spun by an Australian golden orb spider.

The weirdest musical instruments ever >
Incredible videos of 3D-printed instruments>

According to Alessandrini, when the violin is played, the spider silk vibrates the instrument’s composite casing, emitting a sound which can be customised by tweaking the exact blend of the material.

This flexibility means that Alessandrini’s composite material can be adjusted and used in a number of acoustic products such as speakers, amplifiers and headphones.

What do the experts think?

Alessandrini developed his prototype violin in conjunction with the Associazione Nazionale Liutai Artistici Italiani, one of the world’s most influential violin making associations. He consulted 20 of the world’s leading violin makers in Cremona, Italy, the birthplace of Antonio Stradivari, creator of the world-famous Stradivarius violin.

Peter Sheppard Skaerved, a Grammy nominated violinist and Viotti Lecturer at the Royal Academy of Music in London, has high hopes for the spider web composite as an instrument-making material. Sheppard Skaerved has been unimpressed with other modern materials such as carbon fibre because they “have not seemed to offer the organic subtleties of wood”.

However, the spider web violin, he says, “has filled me with excitement”.

“This approach offers a tremendous opportunity to move forward instrument making, using new materials in a way I have long hoped.”