Is this sci-fi violin the craziest-looking instrument in the world?

The piezoelectric violin could be one of the weirdest-looking, prettiest violins of all time - and it's only got two strings.

Made by MONAD Studio with Scott F. Hall as part of a larger collection of bizarre and innovative instruments, the violin differs hugely from a standard violin.

According to MONAD's website, it's going to form part of a "fully 3D printed art installation" at the Jacob Javits Center in New York this April. 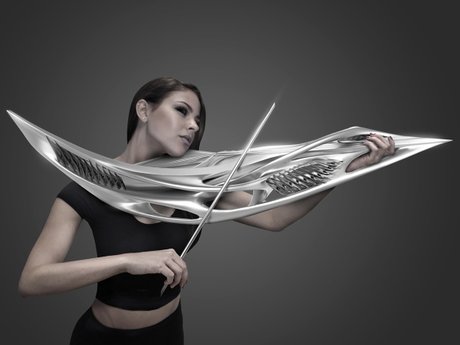 Other instruments in the collection include a cello and a small didgeridoo, alongside some custom-made inventions called the monobarasitar and the hornucopia.

All of the instruments will be presented as part of a larger framework mounted on a wall, itself an instrument which "produces a drone, sonic environment that highlights the radical design of these instruments."

Here's a video of the monobarasitar in action. It's heavy.