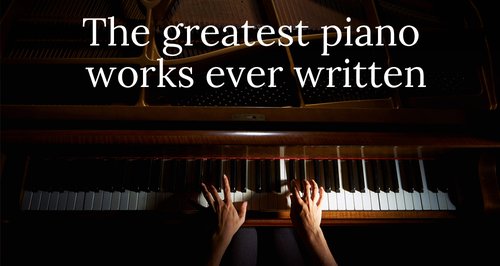 The piano is such a versatile instrument, that naturally everyone wants to write for it. But today we’re getting down to the exceptional stuff: this is a list of the best pieces ever written for piano (no questions asked).

The heart-stoppingly beautiful first movement of Beethoven’s ‘Moonlight’ Sonata is the most famous from his work, and was described by composer Hector Berlioz as a ‘lamentation’. But it couldn’t be more different from the third movement, an epic technical work-out for the fingers...

Clara Schumann was one of the best known pianists of her time, but sadly she moved away from composing, saying "I once believed that I possessed creative talent, but I have given up this idea; a woman must not desire to compose—there has never yet been one able to do it. Should I expect to be the one?". This beautiful piano concerto gives us an idea of her incredible pianism and musical imagination.

Curiously, ‘Clair de Lune’ also means ‘Moonlight’ – but there’s a stark contrast between Beethoven’s Romantic classicism and Debussy’s Impressionism. Don’t be fooled by the initial simplicity of ‘Clair de Lune’: it took Debussy 15 years to write the third movement of the Suite Bergamasque, and the result is a work that sounds simple, but demands the very best from its performers. Get it right, and it allows the most accomplished pianists to shine.

Chopin composed his most well-known nocturne at the tender age of 20, which perhaps accounts for its youthful passion. The build-up from the main theme and waltz-like accompaniment to the dramatic trill-filled finale makes the Nocturne in E-flat Major a strong contender for the most beautiful piano work ever written.

Rebecca Clarke was a 20th-century British composer, who trained at the Royal Academy of Music and Royal College of Music in London before crossing the pond and spending the rest of her life in America. Her music is always thrilling, experimental and enormously powerful. Her Viola Sonata is considered one of the greatest pieces ever written for the instrument. And just listen to the power packed into her Piano Trio for piano, cello and violin.

Schumann’s Kinderszenen are a bittersweet collection of piano miniatures covering themes like games of chase, night-time terrors, bedtime stories and sleep. The most famous, ‘Traumerei’ paints a peaceful musical picture of a child’s dreams. It’s tender and beautifully nostalgic.

The Well-Tempered Clavier was completely innovative for its day, and it paved the way for composers writing for keyboard instruments for the next few hundred years. Bach wrote the first of the two books that make up his work in 1722, making this one of the earliest pieces on our list. Each of the two books contain 24 Preludes and Fugues (the whole work is sometimes known as ‘The 48’), in each key of the Western scale – and each book opens with a prelude in C major, closing with a fugue in B minor.

Bach’s 30 variations on a theme were originally written to help a Russian count overcome his insomnia – and they are named after a keyboard player called Johann Gottlieb Goldberg, who may have been the very musician who played the Variations to help the count drift off to sleep. The work opens with a simple statement of the theme (the ‘aria’) and the 30 variations get more and more intricate, straying further and further from the original theme. The Canadian pianist Glenn Gould recorded what has become the most famous version of the monumental work.

The last of Beethoven’s great piano concertos, the ‘Emperor’ has a strong claim to be the greatest piece ever written for the instrument. The nickname wasn’t given to the piece by the composer himself but apparently by one of Napoleon’s officers who declared it was ‘an emperor of a concerto’. After the colossal first movement, the second movement flows directly into the finale, which with a crash and a bang, ends one of the true warhorses of the piano repertoire. Every pianist worth their salt has recorded the work – but Leif Ove Andsnes’s is a great recording.

'Rhapsody in Blue’ wasn’t entirely positively received by 1920s critics, yet its melange of classical and jazz style grounded Gershwin’s reputation as a serious composer – and its jazz influences are what gives the landmark piece its sultry and indulgent character.

Liszt – Piano sonata in B minor

By 1854, Liszt had put the finishing touches to his monumental Piano Sonata in B minor, and took the music to perform at a private soirée. Among the guests was another composer, Johannes Brahms. Liszt took his seat at the piano and began to play. When he reached a section of the piece of which he was particularly proud, so the story goes, he glanced over at Brahms to see what he thought… only to find his fellow composer snoozing.

Despite its unfortunate first outing, this sonata has become one of the best-loved and most performed piano works. Traditionally, sonatas have four movements – but Liszt was never one to play by the rules. The Sonata in B minor is one unbroken stretch of music, built around a handful of motifs which re-appear in various guises throughout.

The first time this was performed, Mozart took up the role of soloist – because who could possibly play it better than young Wolfgang himself? The concerto’s final movement is legendary for its shift from a dark and restless mood to an utterly jubilant D Major finale. The young Beethoven is said to have adored this concerto, and kept it in his core piano repertoire.

If you’re feeling sombre and brooding, the Sonata Pathétique is the perfect accompaniment. Timeless and joyously recognisable for the unique motif line Beethoven uses throughout, it’s no surprise this sonata remains one of the composer’s most celebrated compositions.

Literally meaning ‘little bell’ in Italian, La Campanella borrows its melody from the final movement of Paganini’s Violin Concerto No.2, in which the tune is accompanied with a handbell. This is the third of Liszt’s six Grandes Etudes de Paganini and it has an ethereal beauty in its tinkling, bell-like notes.

The sonata’s third movement Rondo alla Turca is so popular, it is often played as its own musical entity. The movement imitates the sound of Turkish military bands, which was in vogue with European composers at the time.

Rachmaninov’s Second Piano Concerto has claimed our Classic FM Hall of Fame top spot eight times since the chart began in 1996… but what makes this unassailably epic work of genius so special? Is it the first movement’s contrast between solo piano passages and storming orchestral themes? Is it the emotionally syrupy second movement, which gave Brief Encounter its unforgettable soundtrack? Or is it the third movement’s epic virtuosic finale, under which the finest of pianists can crack?