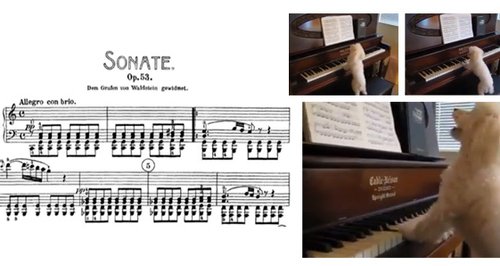 This talented bichon frise has attempted one of the most fiendish sonatas in the piano repertoire.

The opening movement of Beethoven’s Waldstein sonata is notable for its relentless energy, its bold whole-tone transposition of the main theme and its sheer trickiness.

But we’ve found an exciting new attempt, thanks to the magic of the internet:

This new, as-yet unnamed prodigy has burst onto the scene at a time when innovation is key to longevity. We predict great things for this young pup. Here's the original, traditional (far more boring) version: