Wicked is one of the most successful Broadway and West End shows of all time – it celebrated its 10th anniversary on stage in London last year. So we’ve looked into the music theory behind its most hummable hit, ‘Defying Gravity’

‘Defying Gravity’ comes right at the heart of Wicked. It brings the First Act to a dramatic close. Let’s take a closer look at exactly how it works.

At this point in the story Glinda and Elphaba, the two main characters in the story, have met the Wizard of Oz. And Elphaba is disillusioned. She begins to realise she’s going to have to make her own way in the world. And this song shows her puzzling that out.

The music follows Elphaba’s emotions, so we feel right there with her.

This isn’t the opening you might expect from one of the most famous songs in West End history.

It opens with Glinda talking. Then she slips into song – but you hardly notice. Her and Elphaba bicker in short, sharp phrases that mimic what two young girls really would sound like arguing in real life.

Hmm… now where in musical history might we find a style of vocal music that mimics speech?

That was a recitative from Mozart's Don Giovanni. It wasn’t just Mozart, of course. Recitative – or singing that follows the shape and pattern of speech – has been around since the 17th century

So we have a recitative style opening but there’s more to it than that. Take a look at this:

That is **a lot** of accidentals. Both singers have to tackle unexpected intervals in this opening, giving the music a sense of unease and making the audience feel on-edge.

What about key signature? 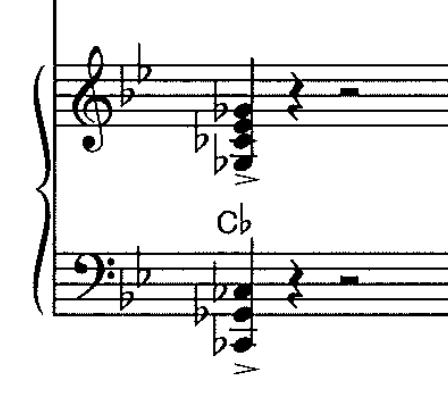 The point is that we don’t know, we’re on shaky ground – just like Glinda and Elphaba who’ve just found out their idol is not the man they thought he was. Everything they thought they knew has been undermined and now they have to tell their own story.

So yeah. The key signature is all over the place.

We’re in cut common time (2 minims per bar) but Elphaba and Glinda rarely stick to those bar lines. They come in part-way through a bar, sing across the bar lines and use cross-rhythms.

Well anyway. You get the point. These cross rhythms also give the song a huge amount of forward momentum, catapaulting us into that epic chorus. But first…

We need to talk about this moment 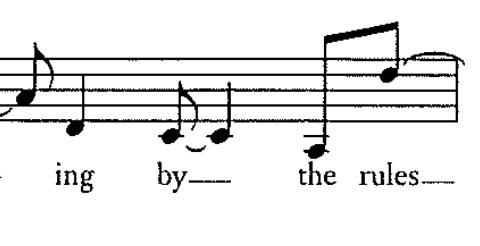 As Elphaba sings “I’m through with playing by the rules of someone else’s game” the tune takes a massive leap of an 11th (11!!) from A flat to D flat the octave above.

As she’s starting to think about taking a leap into the unknown her voice takes a massive leap, ratcheting up our anticipation. And now…

Ok, without looking, do you think the melody for the chorus of Defying Gravity goes up or down?

Up, right? That’s the whole point of the song?

WRONG. The melody descends – it’s the accompaniment that goes sky high. Have a listen.

That cross-over between the accompaniment and vocal line is one of the many things here that gives you chills. Just listen to those high tinkling broken chords and the grounded, determined melody Elphaba sings over the top.

Glinda’s still not persuaded though

And she’s literally singing from a different hymn sheet. She sings crotchet triplets against the accompaniment’s quavers. It’s super crunchy.

And Elphaba’s still working things out

Just before the second chorus, there’s a massive interrupted cadence (that’s a cadence that ends on the fifth chord of the scale, rather than a nice satisfying perfect cadence ending on the tonic or home chord of the key). That tells the audience: this isn’t over yet.

But then, everything changes

Elphaba and Glinda are beginning to see things from the other’s point of view. And the music mirrors that – they start singing together.

First they sing the same notes then they split into harmony – just because they’re different, doesn’t mean they can’t be friends, after all. N'awww.

And we end up where we began

The words the two girls spat at each other in anger – “I hope you’re happy now” are repeated. But this time, the tempo’s slower, all those sharp chords and tricky intervals have gone. This time, Elphaba and Glinda really mean it.

But it’s not over yet

It wouldn’t be a West End showstopper without letting the soloist show off what she can do. We’re at f and ff for the final chorus and then Elphaba just lets rip with “no Wizard that there is or was is ever gonna bring me down!”

She repeats “Bring me down”, holding a high D flat for three bars.

Aaaaand you’re in tears. It's not magic, it's just music theory.