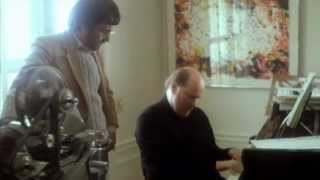 John Williams was at work again here, capturing, in music, a magical movie that did for BMX bikes what Brief Encounter did for steam trains.

The Film: E.T.: The Extra-Terrestrial is the tear-jerking story of the special friendship that develops between Elliott, a lonely young boy and a wise, kind visitor from another planet who becomes lost on Earth. As Elliott attempts to help his extra-terrestrial chum contact his home planet so that he might be rescued, they must hide from scientists and government agents determined to get their hands on the friendly little alien... resulting in an adventure greater than anything either of them could have imagined.

The Score: John Williams's close relationship with Steven Spielberg and the director's own meteoric career meant that he was the composer for many major films of this period, including Close Encounters of the Third Kind, Superman and of course, E.T. for which he won Oscar No. 4. In the video above, Spielberg hums along as Williams plays the theme to E.T. on the piano, before discussing how to incorporate it into a moment from the film.