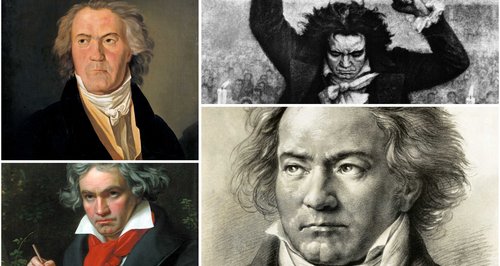 Ludwig van Beethoven's nine symphonies cover pretty much every facet of human existence in one way or another. In other words, they're pretty indispensable.

Where to start with Beethoven's symphonies? It's tempting to think it's just too much effort to plough through all of them, but with our handy symphony-by-symphony guide, you can listen out for the important bits and really get the most out of these monumental works.

Let's start at the beginning...

Click here to listen to our podcast, Beethoven: The Man Revealed on Global Player, the official Classic FM app >

Symphony No. 1 in C major

Now, don't panic, but if you're looking for Beethoven the revolutionary musical visionary, you might not find him here. He was only about 25 when he finished this work, so it's understandable that he might not have completely found his voice yet. However, aside from hints of Mozart and Haydn (he even nicks one of Haydn's themes in the finale), you can hear definite evidence of that blustering Beethoven we know and love. Quick volume changes, explosive energy and the odd experiment (try the free-form opening of the fourth movement) - it's a promising start.

Symphony No. 2 in D major

Things are starting to progress. By this point, the Beethoven tics are starting to fall into place. So, that means we get an exceptionally bold and dramatic opening, lightning-quick strings and, in the second movement, some seriously mournful moments. It would be totally wrong to call Beethoven depressing, but his slow movements do tend to lay bare his more 'sensitive' tendencies and the second movement here usually clocks in at about ten minutes, so sit comfortably and bring a hanky.

This is where it starts to get interesting. And by 'get interesting', we mean 'the rulebook gets incinerated in a political and revolutionary rage by a deaf genius'. The third symphony is the one that, everyone generally agrees, changed everything and kick-started the Romantic period in music. Just listen to the crash-crash of the opening - he's not messing about. Then, as the epic movements progress, we hear what you might call 'classic' Beethoven. Oh, and the political/revolutionary thing? Beethoven initially dedicated the symphony to Napoleon, until Napoleon declared himself Emperor of the French, which made Beethoven tear up the dedication page in a huff. And, presumably, rather annoyed whoever had to copy out the replacement.

Symphony No. 4 in B flat major

The trouble with writing something as bold as the 'Eroica' is that whatever comes next is bound to be a disappointment. From the off, where the third symphony was declamatory and brash, the fourth is subdued and moody. But that doesn't mean there isn't plenty to enjoy. In fact, the fourth has some of Beethoven's most poignant writing in it. Give the second movement a couple of listens - it might sound gentle, but after a while it reveals itself to be quite the melancholic masterpiece.

Symphony No. 5 in C minor

We've made it to the biggie, and one of the only works in history that has become defined by its first eight notes. In fact, those eight notes and the way they're played has become a musical hot potato - no-one seems to agree on how quickly to play them - but once you're past them, it's triumphantly full-blooded stuff. You'll know the first movement, but there's still loads to explore beyond that - go for the bonkers fourth movement for maximum excitement.

Quiz: How well do you know Beethoven's 5th Symphony? >

Symphony No. 6 in F major, 'Pastoral'

If there was any doubt as to whether Beethoven was a romantic composer at heart, then the Pastoral symphony squashed it. What's more, he took all his inspiration for the sixth directly from nature. He was a keen walker and wanted to make this symphony reflect that, so much of the musical material actually sounds like a walk in the country. Consequently, we can hear babbling brooks and birdsong in the second movement, country dancing in the third and a full-on thunderstorm in the fourth. Clever stuff.

Symphony No. 7 in A major

By this point in his life, Beethoven was churning out belter after belter. Seemingly unable to put a foot wrong with his symphonies, the reaction he got from the seventh was predictably positive. In fact, when it was premiered in 1813, the crowd got so excited that they demanded to hear the second movement again. Neatly, that particular movement is based on the same rhythmic idea throughout, and has a curious peculiar quality to it that has made it one of the most popular of Beethoven's symphonic works.

Symphony No. 8 in F major

The eighth is something of a curio in the Beethoven canon. Clearly it was one of the composer's favourites (he called it 'my little symphony in F'), and it features some delightful themes. Beethoven knocked it together in four months and claimed it was better than the seventh (he never was a fan of his own audience), but it got a fairly 'polite' response on its premiere. We'd recommend turning the volume right up for the first movement to get a real appreciation of how wide Beethoven's dynamic range had become by this point.

If you're going to write a big symphony, you might as well make it the biggest one ever composed (at the time). And if you're going to make it about something, you might as well make it about the triumphant union of mankind. No pressure, then. Beethoven's final symphony is a beast, but arguably the most rewarding of all of them. Listen to how the opening of the first movement turns from aimless wandering to mammoth crashes, the skipping strings in the second and the choral splendour of the finale…

Everywhere you look in this epic symphony there's something to enjoy. So as you stand on the sofa, shouting along with the ‘Ode To Joy’ and knocking your cup of tea over, remember that all this noise was made by someone who was, by this point, almost entirely deaf.

Vote now in the Classic FM Hall of Fame for your chance to win £1,000 with Viking! >