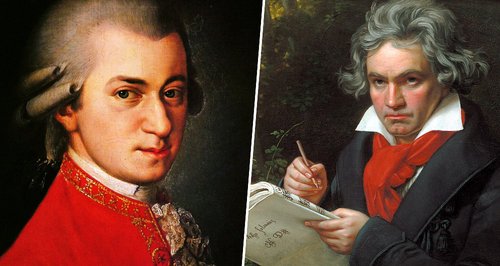 From his earliest days as a prodigy in Bonn, Ludwig van Beethoven's great ambition had been to travel to Vienna to meet - and take lessons with - the man he knew was the greatest living composer, Wolfgang Amadeus Mozart.

So when did they meet?

In 1787, when Beethoven was 17 years of age he left Bonn on six months' leave of absence from the court orchestra, and arrived in Vienna a month later. Armed with a letter of introduction from Max Franz, whom Mozart knew, he gained entry into Mozart's home and was ushered into the music room to meet his great idol.

Mozart was in no mood to receive him. His health was plaguing him – his untimely death at the age of 35 was less than five years away – and he did not relish having to stop work to listen to a child prodigy from somewhere hundreds of miles away.

Click here to listen to our podcast, Beethoven: The Man Revealed on Global Player, the official Classic FM app >

"Play something," he told Beethoven. Beethoven played the opening of Mozart's Piano Concerto No. 24 in C minor. "Not that," said Mozart. "Anybody can play that. Play something of your own." So Beethoven did.

How did Mozart react?

When the young man had finished, Mozart walked into the adjoining room where his wife Constanze was entertaining friends.

"Stanzi, Stanzi," he said, pointing back into the music room, "Watch out for that boy. One day he will give the world something to talk about."

He agreed to take Beethoven on as a pupil, but when Beethoven returned to his lodgings there was an urgent letter from his father telling him to return to Bonn by the next stage – his mother was seriously ill with consumption and doctors feared for her life.

Beethoven had no choice but to leave. Less than two weeks after arriving in Vienna for what promised to be a trip that would change his life, he left for Bonn without ever achieving his ambition of taking lessons with Mozart.

By the time he returned to Vienna in November 1792, Mozart was dead.

How was Beethoven influenced by Mozart?

Beethoven's admiration for, and championing of, Mozart's music remained undimmed for the rest of his life.