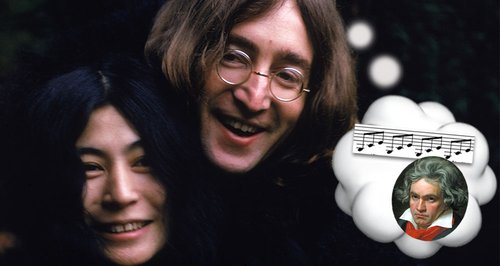 Here’s how Beethoven inspired the Beatles’ ‘Because’...

When Yoko Ono was mucking about with Beethoven’s Moonlight Sonata, John Lennon asked her to play him the chords again, but backwards.

And when she did, it formed the basis of one of The Beatles’ key late-period tracks, ‘Because’.

And now have a listen to it:

It’s clear in the opening arpeggiated riff where Lennon’s Beethoven inspiration comes from. While it’s a bit of a stretch to say that the chord progression is reversed and repeated, there’s a definite musical link between the two.

Paul McCartney is often cited as ‘the classical one’ in The Beatles, but ‘Because’ shows that he wasn’t the only one to take inspiration from classical music.