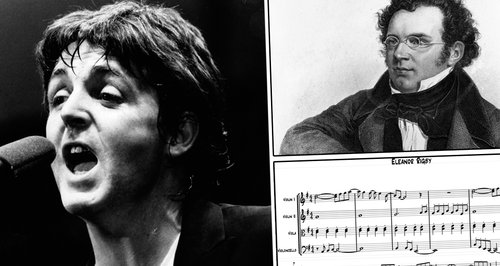 It’s all there in the syncopation, the cryptic words, the dark vibes: ‘Eleanor Rigby’ was Paul McCartney’s art song masterpiece.

So, where did most composers of art songs and Lieder get their lyrical ideas from? Literature, mythology, yes… but mostly it came from life experience. Emotions, artistic extrapolations of the self, that kind of stuff.

Macca leaned on the same inspirations for ‘Eleanor Rigby’: a bizarre and dark story with folk elements, but shot through with one key element that further aligns McCartney with art song composers – loneliness.

If you look at a typical, through-composed art song by someone like Schubert, you’ll see all sorts of clever musical devices peeking through the vocals. And the same is true of ‘Eleanor Rigby’.

First, there’s the syncopation: against the bomping strings in the first verse, McCartney’s vocal refuses to settle evenly on the beat, adding to the sense of unease. You’ll find a similar thing in Brahms’ Zigeunerlieder, where he uses irregular rhythms all over the place to displace your sense of what’s going on. Try the accompaniment here:

OK, so this one isn’t actually Paul McCartney’s doing, but he certainly provided the harmonic base for producer and arranger George Martin to bust out this truly iconic arrangement. Here it is in slightly naff-sounding MIDI:

Listen to how all of those elements combine to make something that’s easily the equal of a Schubert lieder.

The Wihan Quartet play The Beatles