Why is a CD 74 minutes long? It's because of Beethoven 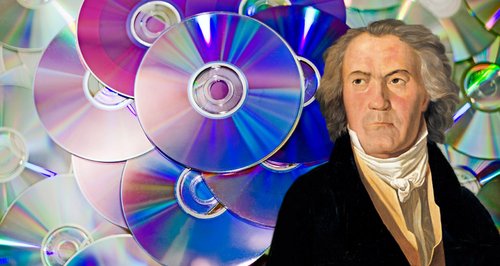 What links Ed Sheeran and Beethoven? It turns out the length of the modern album has its roots in the 19th century.

Seventy-four minutes is an awkward length for a CD, right?

Especially in this digital age of 1s and 0s, so why this particular number for the length of a CD? Well, the answer to that question actually has everything to do with Ludwig van Beethoven, a man who was born well before the invention of the gramophone never mind the CD.

In the 1980s, when Sony and Philips were beginning to negotiate a single industry standard for the new compact disc technology. One key issue was whether the circumference of the new disc should be 11.5cm or 12cm.

Both Sony and Philips knew that the legendary conductor Herbert Von Karajan would be instrumental to the success of their new format. He had agreed to endorse the CD at the Vienna press conference where they would announce the company's prototype.

But he had one condition: that the new technology could allow listeners to hear the whole of Beethoven's Ninth Symphony without interruption.

The longest recording Sony could find was Wilhelm Furtwängler's glacial 1951 recording which ran to a length of - you've guessed it - 74 minutes.

There are a couple of different versions of the story - one says that it was Sony President Norio Ohga who held the Ninth symphony in such high esteem that he insisted that the work would be able to fit onto a CD in its entirety.

Another version says it was his wife - or perhaps the wife of Sony chairman Akio Morita.

But whichever version is true, Beethoven's last symphony is at the root of one of the most important inventions of the modern music industry.

How much evidence is there for the story?

You see, the legend isn't demonstrably false, (it actually appeared as a question on Who Wants To Be A Millionaire), but it wasn't just old Beethoven who was calling the shots on this new tech.

Philips engineer Kees A. Schouhamer Immink writes that Philips were pushing for the CD to be close in size to the cassette tape, whereas Sony were pushing for a slightly larger 12cm disc, partially because they knew that Philips already had a factory capable of producing 11.5cm CDs and if they could decide on 12cm as the industry standard then they would erase Philips' head start in manufacturing.

Eventually the maximum playing length was set at 74 minutes, 33 seconds, and in his grave Beethoven breathed a sigh of relief - modern consumers could now hear the whole Ninth Symphony in all its glory.

But there's a twist to this story. The real limit for CDs started at 72 minutes, not 74 minutes, since this was the maximum length of the U-Matic videotapes which were used for audio masters.

And that Furtwängler recording of Beethoven's Symphony No. 9 would have to wait until 1997 before technological developments would allow it to be released on a single CD.