For much of the last four years, Big Ben has been silent. But that all changed on New Year’s Eve 2021, when the great clock was struck 12 times.

First things first, did you know that Big Ben is the nickname for a bell inside the famous clock tower?

The tower itself was simply called the Clock Tower until 2012 when it was renamed Elizabeth Tower to mark the Queen’s Diamond Jubilee.

What tune does Big Ben play?

The tune that Big Ben plays contains only four notes – G sharp, F sharp, E and B – and different parts of the tune are played at quarter past, half past and quarter to the hour in Westminster.

The tune is called Westminster Quarters, but its original name was the Cambridge Quarters, because it actually comes from Cambridge and was first played in Great St Mary's Church in the centre of Cambridge. It was written in 1793 for a new clock in St Mary the Great in Cambridge but it’s not clear exactly who composed it.

The job was given to one Dr Joseph Jowett but he may have been helped by Dr John Randall, a Professor of Music, or one of his pupils, William Crotch (a composer and organist).

The tune was adopted by Westminster in the mid-19th century.

When does Big Ben chime?

The longest version of the tune is only heard every hour when it is followed by the strikes for the hour.

But that version isn’t actually complete – the chime that’s heard at quarter past isn’t heard in this long version (seen here at the bottom): 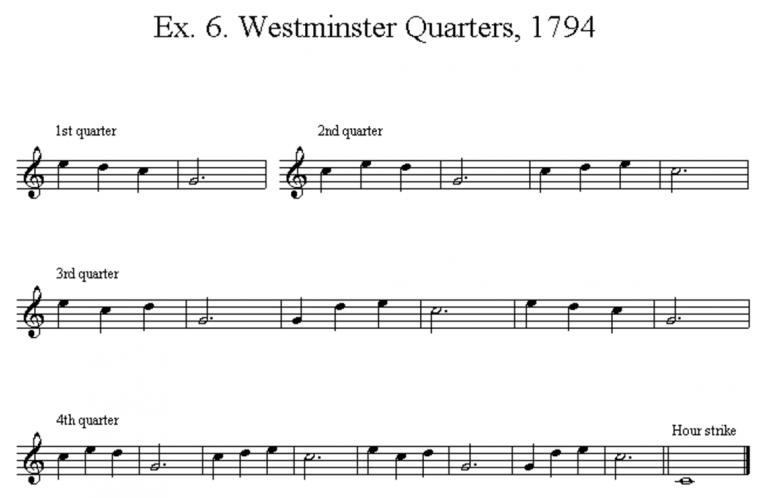 And here's an epic fantasy on the famous tune, Vierne's Carillon de Westminster, played on the organ of Winchester Cathedral by Richard McVeigh:

Why did Big Ben ‘bong’ on New Year’s Day?

With the clock face recently emerging from the tower’s scaffolding which has encased the famous landmark for the last few years, Londoners were excited to hear Big Ben’s bell chime again as a new year began in 2022.

At midnight on New Year's Day, the bell was struck 12 times using a temporary drive mechanism, which replicates the chime created by the original Victorian mechanism which drops a hammer on the bell ever 4.5 seconds.

Where else can you hear the Westminster chimes?

The Westminster Quarters is now the most popular tune for church bells and can be heard all over the country.

So if you’re missing the famous sound of Big Ben while its tower is being renovated, here are just a few of the places you can hear the tune: