Listen to one of the oldest songs ever written, ‘Sumer is icumen in’ 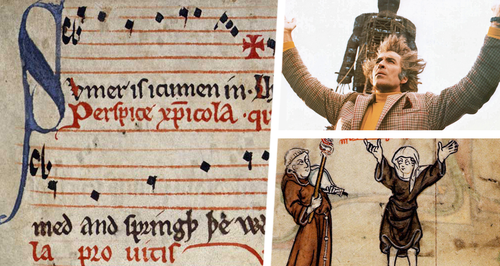 This 800-year-old song was written in the 13th century, making it one of the oldest songs in English. It also contains the first recorded use of the word… ahem, 'fart'

This 800-year-old song comes from a miscellany that was probably written in Oxford around 1260 and it's the first recorded use of six-part polyphony.

Listen to the oldest song in history: the 3,400-year-old Hurrian Hymn >

The beautifully preserved manuscript contains poems, fables and medical texts – and is the only written record of ‘Sumer is icumen in’. The song is a ‘rota’ or round, a canon for several voices (in this case six). It describes the coming spring, a singing cuckoo and various excited farm animals. Click the image below for a closer look at the full manuscript in all its glory. 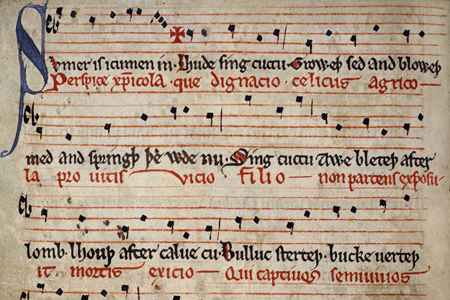 The fact that the song – and this score – has survived to the present day is incredible in itself, but there are a number of other fascinating details buried in it:

First, there are both English lyrics and completely different Latin lyrics. Below the musical staff you can see the lyrics printed in Middle English (black) and Latin (red).

It contains the oldest record of the word ‘fart’

The Middle English contains several words that are recognisable, although one phrase will need a little explanation. ‘Bucke uerteth’ apparently means, ‘the goat farts’, and is said to be the first usage of this mild profanity in written English.

He was brought before the Bishop of Hereford in the 1270s following allegations that he had slept with a number of women, including a nun.

What does the red cross mean?

This is a fascinating piece of musical history. It's an example of musical notation, indicating when each new voice should start. There are Latin directions at the bottom of the manuscript, which translate, according to Wessex Parallel WebTexts, like this: “This round can be sung by four people together... And it is sung in this way: while the others remain silent, one person starts, together with those who are carrying the 'pes'; and when he comes to the first note after the cross, the next one begins, and so on with the others. And the individual singers should stop at the rests where they are written and not elsewhere, for the space of one long note.”

What do the words mean

Academics are unsure whether the English lyrics constitute an innocent description of nature responding to the coming spring, or a bawdy ditty about adultery (the cuckoo is the key here – it's close in sound to the word 'cuckhold', which means a man whose wife is unfaithful). But you want to hear the song...

Listen to Sumer is icumen in

This version is sung by the Hilliard Ensemble.

Uplifting, isn’t it? Like all the joys of spring distilled into choral form. The reaction from 13th-century audiences would have looked something like this: 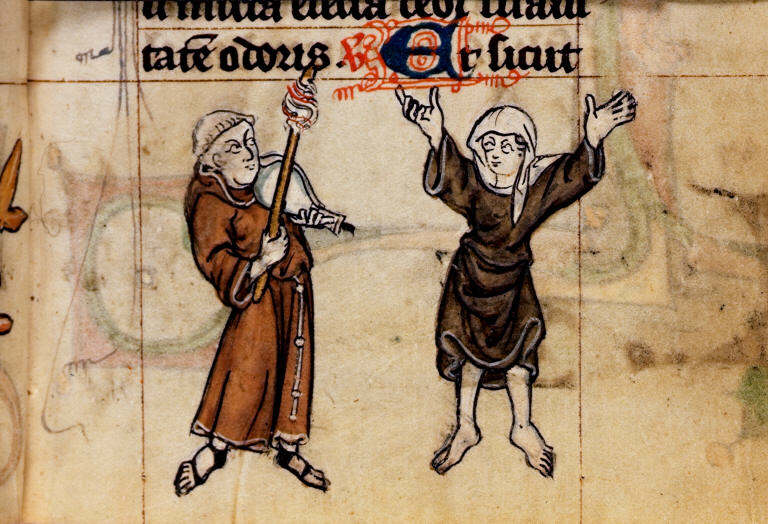 But what are those odd-sounding lyrics and what do they mean? Here's a translation by the British Library.

And here’s the Latin text translated

Look, O lover of Christ, what condescension! The heavenly husbandman, because of a fault in the vine, not sparing his son, exposed him to the ordeal of death; and he brings back the half-dead prisoners from torment to life, and crowns them with himself on the throne of heaven.

'Sumer is icumen in' has appeared in some unlikely places

It was performed at the opening ceremony of the Munich Olympics in 1972:

And a year later it was sung by the islanders during the grisly climax to the horror film The Wicker Man: