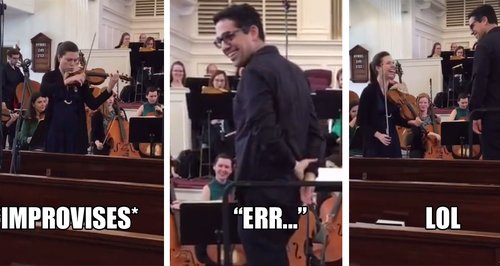 During a rehearsal of Dvořák’s Violin Concerto, soloist Tessa Lark couldn’t resist adapting the cadenza to her own tastes…

When she was putting the finishing touches to the concerto, Lark used the cadenza as an opportunity for a delicious bluegrass variation, much to the surprise and delight of the CityMusic Cleveland orchestra and their conductor:

Lark herself described the improvisation as ‘stradgrass’, saying ‘You never know when the urge to #stradgrass will strike…’ We are fully on-board.