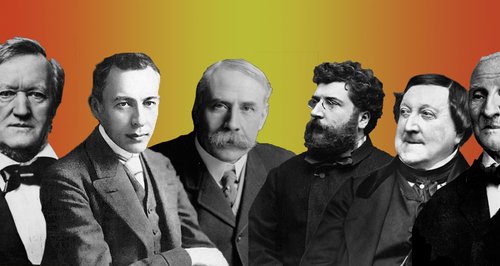 What happens when you put all your talent and energy into your latest work only for it to be a complete, unmitigated disaster?

First up, a tragedy for three operas...

Rossini: The Barber Of Seville

Disastrous premieres can strike anyone. Even an opera like Rossini's The Barber of Seville, a work so popular that Robin Williams performed its most famous aria in Mrs. Doubtfire, can go down like a lead balloon first time around.

On its first night, in Rome in 1816, there was a man in the audience who really didn’t like it – Rossini’s rival Paisiello, who had written a Barber of Seville opera himself and didn’t like the competition from Rossini.

He came to the theatre mob-handed, and led a chorus of jeers and catcalls throughout, which resulted in a few onstage mishaps as the performers, understandably, lost concentration. The evening had ended with the audience baying, ‘Pai-si-ell-o, Pai-si-ell-o!’ to a closed curtain.

Rossini was not the only composer on the receiving end of first-night sabotage.

In 1861, Wagner really wanted Tannhäuser to succeed at the Paris Opera, so he agreed to their demand for a ballet scene. The trouble was, the high society Parisian Jockey Club only went to the opera – fashionably late - for the dancing, which was always in the second act. They were outraged that Wagner had put his ballet in the first act, and got their own back with catcalls and whistles.

Wagner's turmoil was nothing to what happened to poor Bizet at the premiere of his masterpiece, Carmen, at the Opera-Comique in Paris in 1875.

Word got out that the opera was about an amoral woman who did as she pleased. But the first-night audience didn’t jeer or whistle. Instead, they were so shocked that they barely responded at all to the drama. And the next day, the reviews ranged from disappointed to horrified.

The first run of shows in Paris limped on, with the management even giving away tickets to fill the house. The morning after the 33rd performance, Bizet died unexpectedly of heart disease, the same day as his wedding anniversary. He was only 36. The tragedy reawakened interest in Carmen – when it was revived a few months later it was much more successful.

Tchaikovsky went to see it, and said: “it’s a masterpiece in every sense of the word.” Too late for Bizet, alas.

It was not only the crowds who ruined the first performance of classical works - sometimes, even maestros liked to meddle...

Although Elgar conducted the premiere of the concerto himself, he shared the podium that evening with one Albert Coates, who conducted other parts of the programme.

Coates earned himself the undying scorn of Lady Elgar for his mismanagement of the concert – she called him “that brutal selfish ill-mannered bounder Coates” and complained he took up too much rehearsal time.

The result was that the concerto was seriously under-rehearsed. As one review lamented, “never, in all probability, has so great an orchestra made so lamentable an exhibition of itself.”

A complete debacle befell poor Bruckner with his Third Symphony.

The perfectionist composer agonised over completing his symphony, his chosen conductor died so the premiere was rescheduled and Bruckner himself was supposed to conduct (not his strongest suit).

The players of the Vienna Philharmonic made it very clear that they did not like the piece from the first rehearsal.

During the premiere itself, which took place at the end of a very long concert, was accompanied by the sound of people leaving – including the musicians themselves!

Bruckner ended up almost in a huge concert hall, apart from 25 loyal fans and students. He stopped composing for a year.

Heartbreaking. But guess what, Bruckner the trooper didn't give up! He returned to the symphony, revised it, and the new version was acclaimed by all!

Rachmaninov: Symphony No. 1 in D minor

The history of classical music is filled with cruelties. And no-one felt them more keenly than Rachmaninov: the initial failure of his First Symphony in 1897 haunted him for the rest of his life.

Rachmaninov wasn’t very confident about the work, and sadly, he was right: at the premiere, the fatal blend of an under-rehearsed orchestra and a drunken conductor – composer Glazunov, no less – brought about a fiasco that fellow composer and critic César Cui compared to the 10 plagues of Egypt. Cui went on to say the symphony was “fit only for a music conservatory in hell.”

Rachmaninov called it “the most agonising hour of my life” – he hid in a stairwell, hands over his ears. His dreams, his hopes and confidence were destroyed and for the next three years he could hardly write anything.

After falling into depression, he locked the manuscript for his Symphony No. 1 away in a desk. Eventually, with psychiatric help, he returned to work. His Piano Concerto No. 2 proved to be a huge success, but he never quite got over that disastrous premiere.

If you're feeling a bit deflated after reading about all these disastrous premieres, cheer up and check out these composers who got more lucky the second time around.