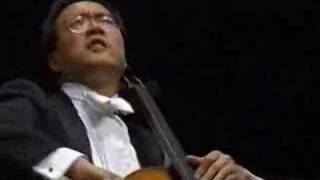 Cellist honoured for his promotion of the works of Dvořák.

The acclaimed cellist Yo-Yo Ma has been named as the winner of a prestigious award, given by the Academy of Classical Music, the Czech Republic-based organizer  of the Dvořák Prague International Music Festival.

Announcing Ma as the recipient of the 2015 Antonín Dvořák prize, the Academy described him as 'a relentless advocate of the arts and, no less importantly, promoter of the work of Dvořák'.

The award recognises personalities who have contributed to the promotion of Czech classical music in the Czech Republic and abroad.

The cellist will receive a glass cello, made by the Moser Company, at a ceremony at the Czech Ministry of Culture to be held next Monday, 8 September.

On Thursday 3 September, Classic FM will give the exclusive UK premiere of the new album Songs from the Arc of Life by Yo-Yo Ma and pianist, Kathryn Stott. Described as a "musical journey shared by Yo-Yo Ma and Kathryn Stott, and a window into our universal adventure through life and time” it celebrates 30 years of the pair’s friendship, concerts and recordings. A different track from the album will be played in each programme throughout the day on Classic FM.

Ed Sheeran: ‘Yo-Yo Ma emailed me to tell me he loved my song Shape of You’

The time Yo-Yo Ma left his Stradivarius cello in the back of a New York cab...

Cellist Yo-Yo Ma surprised passers-by in a picturesque national park, because music and nature are one.