The Chineke! Orchestra founder speaks to Classic FM’s Alexander Armstrong, ahead of the ensemble’s debut Classic FM Live performance, about the visceral power of live music – and the orchestra’s mission to champion change and celebrate diversity.

What is the special essence of live orchestral music? It’s something that’s difficult to put into words.

“I think it’s this extraordinary thing of playing this wonderful music in a situation where it’s completely non-verbal,” Chi-chi Nwanoku, double-bassist and founder of Chineke! Orchestra and Foundation says. “Nobody’s speaking, but all these incredible sounds that have been written for us are coming together without a word being said.”

“I think people really underestimate the power of this form of communication,” Nwanoku confides. “It has a deep, visceral impact on not just the players, but the audience as well, who are not just watching but listening.”

“It was the very first piece that we played when we walked onto the stage on 13 September 2015 [which was Chineke!’s first concert],” the double-bassist says fondly. “62 of us walked onto that stage at the Queen Elizabeth Hall, and prior to that not a single one of us had ever played a piece of music written by a composer of relative ethnicity.

“It was so uplifting to discover this music, and it was also saddening for all of us, because we felt this is wonderful music, and we’ve been cheated of it: throughout our education we didn’t know that he existed.”

Read more: Who was Samuel Coleridge-Taylor, the English composer referred to as ‘Black Mahler’?

Lucky for us, and thanks largely to the work of Chi-chi Nwanoku and championing these works with her orchestras, and as a presenter on Classic FM, we hear Coleridge-Taylor, and other Black, Asian and ethnically diverse composers’ music more often on concert stages and over airwaves now.

Indeed. “I’d already had a three-decade career in the classical industry and found myself the only person of colour on the stage, and not just on the stage but in the entire auditorium,” Nwanoku reflects in her chat with Xander (watch in the video above).

“That also included management staff, backroom staff, the repertoire that we play... absolutely everything. I was never represented anywhere in the industry,” Nwanoku admits.

“Ed Vaizey, the previous culture minister, started to call me into his office in Westminster to ask me why. And I’d never really gone there, even though I knew why I was the only person,” Nwanoku says.

It was at a 20th anniversary Kinshasa Orchestra concert at the Royal Festival Hall in London that Nwanoku had what she describes as her “lightbulb moment.”

Ignoring frankly reprehensible comments that Western classical music is “not really Black people’s music” and “Black people aren’t very good at classical”, she established the Chineke! Foundation and formed the professional Chineke! Orchestra of all Black, Asian and ethically diverse players, and soon the Chineke! Junior Orchestra, to create a “pipeline” of young talent.

“The first concert was sold out, and it’s literally gone from strength to strength,” Nwanoku tells Alexander. “We’ve played in major international festivals, and this year we had our Edinburgh debut. And we’ve played European cities, et cetera, and we’ve got USA, Australia and more coming up.”

Nwanoku has truly been a trailblazer in classical music, fearlessly and tirelessly forging a path for Black and ethnically diverse voices to be heard on the concert stage and in classical programmes.

Classical music is lucky to have her. And, to think, this may not have always been the case: Chi-chi was actually destined for quite a different career path.

“I swapped my legs for my arms,” Nwanoku laughs. She was a prodigious track and field sprinter who was pursuing a glittering career in the 100 metres, until an injury at a fierce “friendly” football match literally stopped her in her tracks.

“My leg was kicked whilst mid-air, and I had a very bad dislocation of the knee,” she says, “but as a sprinter my career would have been over 25-30 years ago, so I can keep going with this one.”

And how lucky we are that she can keep going.

Listen to Chi-chi Nwanoku and Chineke! Orchestra performing at Classic FM Live 2021 at 8pm tonight on the Classic FM Concert with John Suchet. Or catch up afterwards on Global Player.

‘Why do Black people have to be that much better to win an audition?’ – Chi-chi Nwanoku on classical music’s diversity 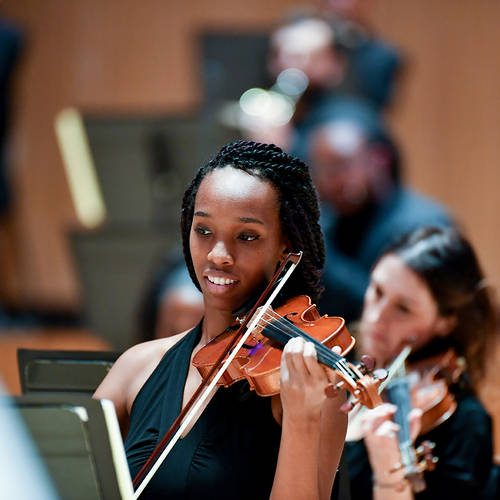