Young flautist will now record a performance of a piece composed for her by Sir Karl Jenkins after winning classical music prize, in collaboration with Classic FM.

Flautist Emma Halnan has won the Arts Club-Karl Jenkins Music Award, a classical music competition in collaboration with Classic FM that is now in its second year.

Halnan impressed the panel of judges with her performances of repertoire by all female composers: Kokopeli by Katherine Hoover and Concertino by Cécile Chaminade. Halnan's prize is £4,000 - and the chance to record her winning performance, as well as a short work especially composed by Sir Karl Jenkins, in a London studio and see it broadcast on Classic FM.

The joint-runners up, Margherita Balanas (cello) and Tabea Debus (recorder) each received a cash prize of £500. All three prize winners are currently studying at the Royal Academy of Music in London. 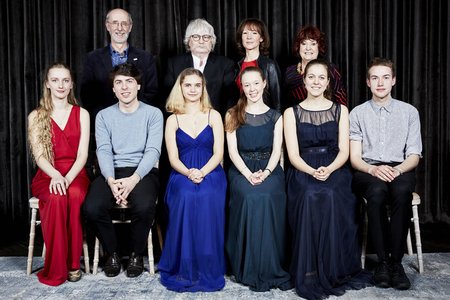 The Arts Club played host to six talented finalists; the other three were violinists Nicolas Dupont and Charlotte Saluste-Bridoux, and percussionist Jacob Brown. During the evening event, candidates were judged upon technique, individualism, musicality, interpretation, communication and overall performance.