Classical music-loving runners are being encouraged to run 5k or walk 2.75k in the time of Beethoven's Symphony No. 5.

More than 600 aspiring athletes are taking to the streets in order to run faster than one of the biggest geniuses in classical music, Ludwig van Beethoven. Herr Beethoven himself won't be taking part in the race - he'll merely be providing the soundtrack with his instantly recognisable symphony, No. 5.

Beethoven's iconic work lasts approximately 34 minutes from start to finish, so athletes will have to run at just under 9km (5.59 miles) per hour to complete the race in time. Anyone who doesn't feel up to the running challenge can walk the race instead.

A member of the Royal Scottish National Orchestra is taking part in this year's event, alongside five staff from Scottish Natural Heritage who plan to dress up as Scotland's most iconic species.

This year's run takes place on 20 October at the University of Stirling. Money raised will be split between Children's Hospice Association for Scotland (CHAS) and Parkinson's UK.

Picture: RSNO musicians armed with a bow and violin case 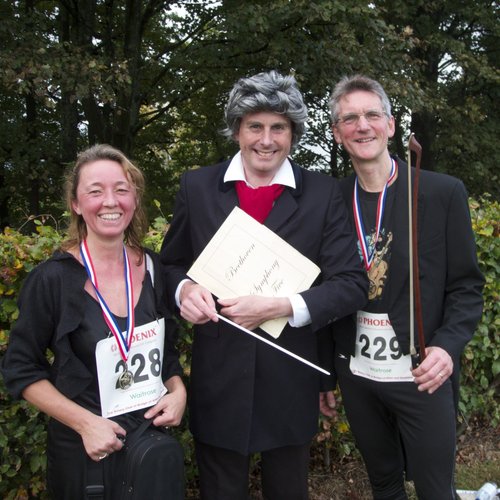