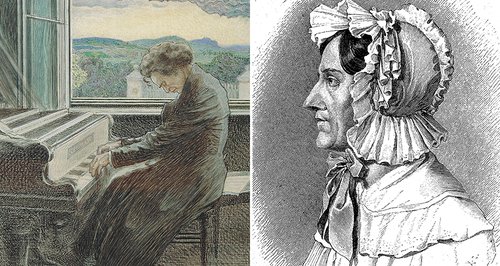 Nannette, remembered as the wife of piano builder Johann Andreas Streicher and a surrogate mother to Beethoven in his early days in Vienna, was also one of Europe’s finest piano builders in her own right, an American journalist has discovered.

Nannette Streicher, a woman previously believed to be a mother figure for Beethoven and a ‘fine pianist’, has had her true talents diminished by music scholars and was actually the one building young Ludwig’s pianos – a journalist for the New York Times argues.

Here’s how the story goes. Beethoven first met Nannette Streicher, née Stein, when he was a boy of 16, returning from his abortive trip to Vienna in 1787 to see Mozart.

Nannette was the daughter of a renowned piano and organ builder, Johann Andreas Stein. The family lived in Augsburg, where Beethoven stopped on his return to Bonn.

The pair had a shared experience to talk about. Nannette was herself a highly talented pianist, and – as Ludwig had just done – had played for Mozart in Vienna. Mozart wrote to his father in 1777 making fun of Nannette’s mannerisms, but also describing her as a very talented pianist who might one day become a great pianist.

Soon, Nannette picked up many of her father’s skills and gained a reputation as an expert craftswoman in her own right.

Two years after her father’s death, she married a man named Johann Andreas Streicher (pictured below) in 1794. The couple immediately moved to Vienna, where they established a piano factory in the Landstrasse suburb of the city. The Streichers made many pianos for Beethoven, who was highly complimentary about them.

Read more: Listen to Beethoven’ music played on the composer’s own piano >

Here’s where New York Times journalist Patricia Morrisroe jumps in. Nannette is remembered in the history books as the wife of ‘acclaimed piano builder, Johann Andreas Streicher’. But she was actually the one who owned the piano factory, and employed her husband, a pianist and teacher, to handle sales, bookkeeping and business correspondence.

“Many Beethoven scholars, perhaps finding it inconceivable that an 18th-century woman could build a piano, have turned Andreas into the manufacturer and Nannette into his shadowy helpmate,” Morrisroe says.

Read more: 21 of the greatest women composers in classical music >

The Streichers’ house became a centre for musical events, which took place on Monday mornings and were frequented by Vienna’s leading musicians. It is beyond doubt that Beethoven will have performed there on many occasions.

On top of her musical craft, Nannette also acted as a kind of surrogate mother to Beethoven. She would frequently find him new lodgings after he had been thrown out for pounding on the piano and the walls in the middle of the night. She would get a key cut, let herself in, tidy his lodgings, remove uneaten food, even take his clothes home and launder and press them.

She was always on hand to look after him during his frequent bouts of illness, and Beethoven turned to her regularly for advice on domestic matters – particularly after he had become guardian of his nephew, Karl.

Nanette and her husband died in the same year after 39 years of marriage. They are buried together in the musicians’ quarter of the Zentralfriedhof – main cemetery – south of Vienna. Their grave is facing Beethoven’s.