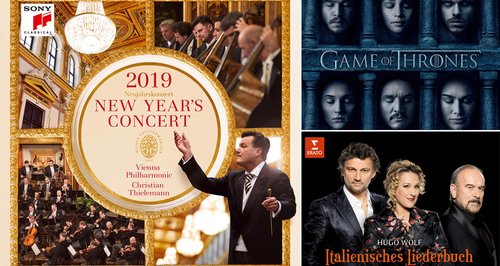 There are four new entries that have made it on to the chart this week, including the New Year's Concert 2019. The annual concert performed by the Vienna Philharmonic and conducted by Christian Thielemann makes a late entry after the New Year celebrations, but comes in strong at No. 8.

Other new albums on the chart are In a Strange Land by Stile Antico, a compilation of pieces by Elizabethan composers in exile, Italienisches Liederbuch by Diana Damrau, Jonas Kaufmann and Helmut Deutsche, and Bach: Keyboard Works by Federico Colli.

Score by 2Cellos also re-enters the chart at No. 27 this week, as does the Game of Thrones Season 6 soundtrack by Ramin Djawadi at No. 29 in anticipation of the new season, which is out this April.