Classic FM Chart: Top 10 has a shake-up with new entries 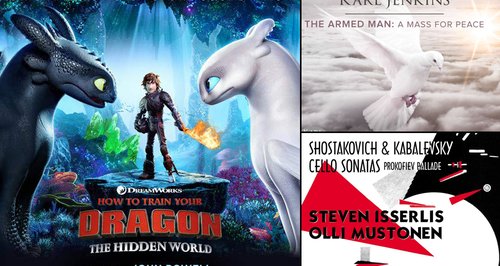 Two new entries make it into the chart this week, and both jump straight to the top 10.

Apart from firm favourites Andrea Bocelli's Sì and André Rieu's Romantic Moments II at Nos.1 and 2 respectively, the top end of the chart has had a fair amount of displacement this week. Though his new album Nocturnes remains popular, Vangelis slips from his No. 3 spot last week to No. 5 this week.

Two new entries make it into the top 10 this week – Shostakovich & Kabalevsky Cello Sonatas recorded by Steven Isserlis and Olli Munstonen at No. 9, and the soundtrack to How To Train Your Dragon: The Hidden World (music composed by John Powell) at No. 10.

The only chart re-entry this week is Sir Karl Jenkins' The Armed Man – A Mass For Peace at No. 29. This comes ahead of the Welsh composer's 75th birthday celebrations this month.