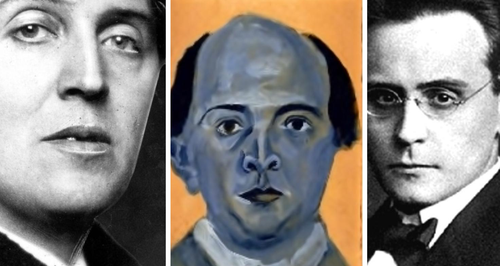 Difficult, tuneless and degenerate? Far from it. The serialism composers of the Second Viennese School like Schoenberg, Berg and Webern are among the most controversial of the 20th Century, but how do you go about starting to listen to them?

What's not to like about a series of mathematically ordered and determined notes that don't make harmonic sense, arrive at unexpected moments and are often wilfully noisy? Alright, maybe we're coming at this from the wrong angle. By the time the romantic period was winding down at the turn of the 20th Century, classical music was the biggest and most emotional it had ever been - which meant that something had to give.

Putting it simply, after composers like Wagner and Mahler expanded their sounds with huge orchestral forces and rich, layered sounds, the composers of the Second Viennese School stripped things right back. And that included the way that music was composed. No more would composers be slaves to harmony and melody, to tunes and emotion like their counterparts in the First Viennese School, Haydn, Mozart, Beethoven and Schubert.

Arnold Schoenberg (pictured above, centre) was the key figure in establishing that completely new way of composing.  Although he started out writing mostly tonal music (using conventional harmony and melody like his romantic peers), he went on to develop the 12-tone method. But first, let's hear just how romantic a composer he was when he first started. Here's his tone poem 'Verklärte Nacht' from 1899, early on his career:

And now, compare that with something he wrote in 1928, the Variations for Orchestra:

That's an astonishing leap from the sublimely lyrical to the challengingly honk-laden. Schoenberg achieved it by developing his 12-tone method, in which he would take the 12 notes of the musical scale and arrange them in a predefined order. Sometimes it would be completely random, other times it would be in a very particular order. It meant that the music wasn't based on melody, it was based on maths. Unsurprisingly, it was met with some hostility by the musical establishment.

Schoenberg was a massive influence on serialism's two other biggest exports, Alban Berg and Anton Webern.

Berg studied with Schoenberg for six years in the first decade of the 20th Century, and seemed to take a lot from his experiences. Gently tweaking Schoenberg's 12-tone brand of serialism by developing an entire piece from just one four-note idea. Try his Piano Sonata for size (and brace yourself for Glenn Gould's divine hammering on the keys):

Anton Webern was also influenced by the great Schoenberg, and extended his 12-tone serialism into something that would later be called 'total serialism'. Webern's music was especially stripped-back and precise, often requiring some strange techniques on the part of the performer, like flutter-tonguing and bashing instruments to get a percussive sound.

Most of all, though, Webern was responsible for influencing the next generation of serialists. Without those baby steps in a world of tonal freedom (albeit one with some fairly bonkers sounds in it) the like of Karlheinz Stockhausen, Steve Reich and Pierre Boulez wouldn't have made some of the cornerstones of modern classical music.

So, even though it might be a challenging listen, it's worth giving all of the Second Viennese School a listen - there's literally nothing like them.