This piece only has ONE note in it, but is still absolutely thrilling 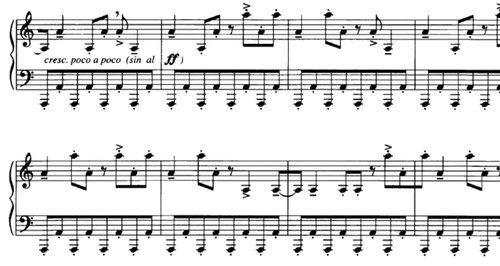 Ligeti definitely had a musical sense of humour - you won't believe what happens at the very end...

There have always been on-going debates as to what defines a sound as music - does it need a key? How many instruments should there be? Are time signatures essential? How many notes should it have? Does it need notes at all, like John Cage's 4'33?

Whatever your opinion may be, you should listen to this genius composition by György Ligeti, which is entirely based around the note of A.

Musica ricercata is a set of eleven pieces for piano which were written by the Hungarian composer between 1951-1953, eventually premiered sixteen years after completion. Each movement of the work adds in another tone, building up to the full twelve tones by the end. This first movement develops the single pitch class by utilising rhythm and timbre, then leads into a gradual crescendo and accelerando, and finally the layered polyrhythms amalgamate into a final surprise coda.

Did you expect the surprise at the end?