Vivaldi's music boosts brain power: science says so and everything

Struggling with a task? Need to be mega-brainy? Vivaldi's Spring from The Four Seasons will do it - and science knows.

Listening to Vivaldi's Spring from The Four Seasons could have beneficial effects on the brain. Psychologist Leigh Riby, in a study for Northumbria University, says 'well-recognised, vibrant, emotive and uplifting first movement, had the ability to enhance mental alertness and brain measures of attention and memory.'

But before you reach for that Nigel Kennedy record, let's take a look at exactly why this is... (and we still need to talk about that haircut, Nigel.) 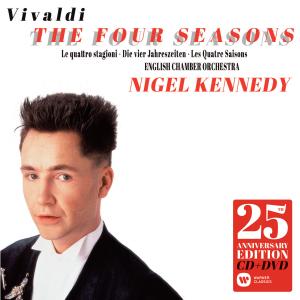 Now for the technical stuff...

The study measured the response times of 14 participants, who were asked to press the space bar on a keyboard when a green square flashed on a monitor, ignoring a series of other coloured shapes. When listening to the first movement of Spring, the average response time was 393.8 milliseconds, compared to 408.1 while working in silence, or 413.3 while listening to Autumn.

So why this piece?

Spring is in a major key, traditionally associated in Western classical music with happy music, as opposed to more sombre minor tunes. But the key of the music was found to have no impact on participants. Autumn, the other major key concerto in the set, was found to have no effect on brain function, along with Summer and Autumn.

It could well be the positive imagery associated with the music that impacted the study. Another recent study found people's mood could be improved by listening to another piece of programmatic classical music - Rodeo, by Copland, which evokes cheery images of cowboys and barn dances.

So when spring comes around in March, there's another reason to rejoice. Make sure you turn that music up, because Vivaldi's soundtrack to the season makes you smarter.