At this landmark age, Slenczynska has achieved an astonishing nine-decade long career, having begun performing as a child prodigy in the 1920s.

To mark the occasion, Slenczynska announced her resigning with the record label, Decca Classics for her first album with the company since the 1960s; Slenczynska’s new solo piano album, My Life in Music is due to be released later this year.

When asked about the album Slenczynska responded, “Whoever heard of a pianist my age making another album?

“Music is meant to bring joy. If mine still brings joy to people, then it is doing what it is supposed to do”.

Born in California in 1925, Slenczynska was the daughter of Polish immigrants. She made her concert debut at the age of just four years old, and one year later, performed a work of Beethoven on television (watch below).

At six, Slenczynska made her European concert debut in Berlin, and now 92 years later, this legendary performer is still enchanting audiences across the globe with her piano skills.

It is thought that the young pianist even once stepped in for the great Russian musician at the last minute when he was unable to perform due to an injury.

According to sources, the two would often drink tea together and to this day, Slenczynska wears a Fabergé egg necklace which Rachmaninov is said to have gifted her.

Slenczynska also had connections with another prominent composer, American Samuel Barber, and heard his famed Adagio for Strings before the work even had a title.

During lockdown, Slenczynska uploaded videos of herself performing Beethoven sonatas to YouTube, to celebrate the German composer’s 250th anniversary.

Despite her age, the pianist is still an active performer and most recently played at Chopin International Festival and Friends in October 2021 in the Polish Embassy in New York. Next month she will be celebrating her 97th birthday with a recital at Lebanon Valley College, Pennsylvania, on 6 February.

Slenczynska’s album, My Life in Music, explores the music of Chopin, a composer who had a heavy influence on the young pianist’s childhood.

According to her memoir, Forbidden Childhood, Slenczynska was made to practise all 24 Études before breakfast every morning by her father, Josef Slenczynski, who was a skilled violinist.

She would subsequently earn a reputation as one of the most celebrated Chopin interpreters of her time.

The album also features music from composers such as Debussy, Grieg and Bach, who all provide memories of her beloved piano mentors and teachers.

My Life in Music is out now on Decca Classics in conjunction with Universal Music Australia. 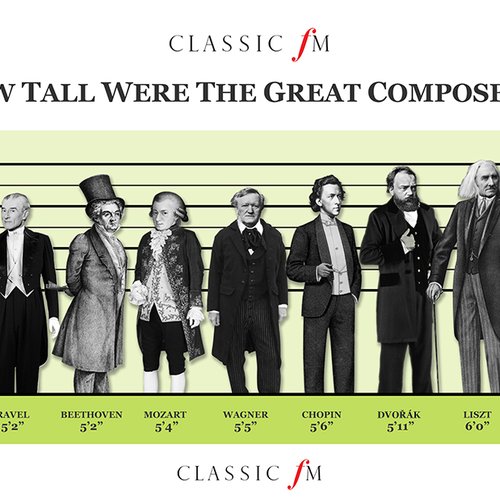 How tall were the great composers?