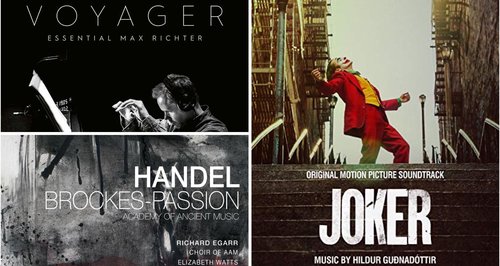 The release of ‘Joker’ last weekend sends the movie soundtrack straight to the top position – knocking Einaudi to No. 2 – and is joined by two other new entries in the top 10.

The movie soundtrack to the recently released Joker soars straight to No. 1 in this week's chart, knocking Einaudi’s Islands - Essential Einaudi to No. 2. The soundtrack to the film was composed by Hildur Guðnadóttir – who also recently scored the Emmy-winning Chernobyl miniseries.

Along with Joker, there are also two other new entries which have flown straight into the top ten. Handel: Brockes-Passion by the Academy of Ancient Music enters at No. 3, and Max Richter’s Voyager – Essential Max Richter at No. 4.