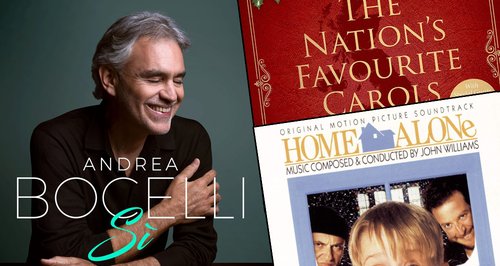 It's Andrea Bocelli's fourth week at No. 1, but Aled Jones and Russell Watson aren't far behind. Christmas music is also starting to take over the chart.

There has been no change in the chart’s top three albums this week – Sì by Andrea Bocelli still leads the way, followed by In Harmony by Aled Jones and Russell Watson, while The Ultimate Classical Collection hovers just behind at No. 3.

The top 10 consists of the same albums as last week, only slightly re-ordered. André Rieu's Best of Christmas album with the Johann Strauss Orchestra has edged past James Newton Howard's soundtrack to Fantastic Beasts: The Crimes of Grindelwald. As we near the end of November, The Nation's Favourite Carols recorded by the Royal Philharmonic Orchestra moves up fifteen places in the chart to No. 14.

Three albums have made a leap into the chart this week. A compilation of Vaughan Williams' orchestral works jumps in at No. 21, and two re-entries make it in at No. 23 and 24 – Johann Sebastian Bach by Vikingur Olafsson and the Home Alone soundtrack by John Williams.