These are the 29 stages of listening to Ravel’s Boléro

Maurice Ravel’s Boléro is one of the most famous pieces of classical music ever written. So you’d think Ravel would have been really proud – chuffed, even – that one of his works was recognised around the world, right? WRONG. He hated it. And tbh, we can sort of see why…

1 Has it started yet?

4 What if he loses count? Would they just start again? Such concentration.

5 Oh good someone else is playing now. That snare drum guy must be **relieved**

6 Ooh that clarinet line was a bit risqué for a concert hall.

11 Wow that snare drum guys is still going in the middle of all that.

16 Wow, I really have a new found respect for percussionists

18 Is this getting louder or are there just more instruments playing?

23 The conductor’s hair is properly wild now. We must be getting near the end.

24 OMG, we reached ff like 10 minutes ago. They must be at about fffff by now.

28 Phew. There’s probably a really obvious metaphor here for something that builds up, gets faster and more energetic, and ends with an enormous climax but I just can’t think of it. Nope.

Bernstein's 'The Masque' is now a majestic piano and percussion multitrack

This is absolutely how you should conduct Ravel’s Bolero 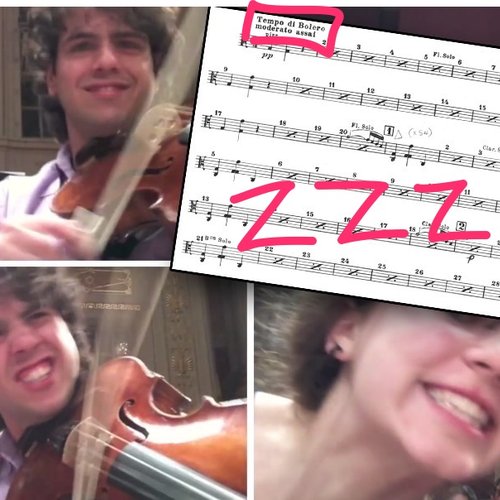 JOYOUS: this is what happens when the viola section gets bored during Bolero