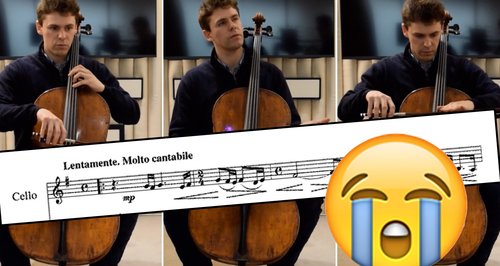 Christian-Pierre is one of today’s very best cellists. We asked him to explain what exactly it is that makes Rachmaninov’s gorgeous piece so moving. And to give us some tips on how to make your audience weep.

Rachmaninov’s Vocalise was originally written for voice and orchestra as the final piece in his ‘Fourteen Songs’, Op. 34.

But because the piece has no text and can be sung to a vowel the singer chooses, it lent itself to instrumental arrangements.

The most famous of those arrangements is that for cello and piano by the legendary by Jascha Heifetz and Mstislav Rostropovich. We asked Christian-Pierre La Marca to give us some tips.

Think of the human voice

The piece was originally written for the human voice, after all. The key to this, explains Christian-Pierre, is in the vibrato and the movement of the bow.

Think of the sections where the tension builds up and where it is released. Arguably, this is important for every piece of music – you can see Christian-Pierre’s masterclass on how to play solo Bach here, in which he talks about points of tension and release.

Imagine it as a conversation between two people

Everyone has their own sound

But here are some ideas for squeezing those tears from your audience with the heart-stopping beauty of your playing.

And here's a section of the whole gorgeous piece

We're not crying, YOU'RE crying.

Christian-Pierre La Marca's new recording ‘Cantus’ is out now on Sony Classical and available on Amazon and iTunes.