An *oboist* inhaled helium and played a virtuosic Mozart concerto 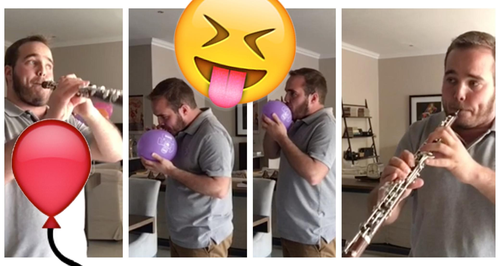 Mozart's Oboe Concerto in C K314, performed on an instrument full of helium, because of course.

Helium is lighter than air, so the sound waves travel through it faster, with hilarious consequences when there's a voice box or instrument involved.

We should point out that doctors do not recommend inhaling helium. In sufficient quantities it can have adverse affects on health and has on occasion caused deaths.

However, other woodwind players have tried playing their own instruments after inhaling inhelium. Here is balloon-loving oboist Johan Ferreira playing Mozart's Oboe Concerto, with the traditional non-helium technique, and then with helium.

Johan is actually playing the concerto next weekend with the Gauteng Philharmonic in Pretoria, South Africa. Good luck for the gig - just lay off the balloons beforehand.