A Mozart manuscript which was smuggled out of Nazi Germany by a Jewish refugee will be auctioned in London by Sotheby's on May 20th, where it is expected to fetch somewhere between £300,000 and £500,000, according to pre-sale estimates.

The manuscript is made up of the first five pages of Mozart's Kyrie in C Major, composed in 1772. Mozart was only 16 years old at the time of its composition, but abandoned it after completing those first five pages.

It was saved in 1938 by a Munich-based Jewish musician called Rudolf Götz, who fled Nazi Germany after purchasing the manuscript. He then left for South America, keeping the main score separate from the title page to mask its true identity.

Simon Maguire from Sotheby's auction house commented: "The family couldn’t take obvious valuables or currency with them when they left so they took this. We don't know how much it cost but in the 1930s something like that didn't make a lot of money.

"Ten years earlier there had been a whole auction of Mozart manuscripts that would be worth millions today, but half of them failed to sell."

According to the Sotheby's listing for the item, it is "the most substantial and important autograph music manuscript by Mozart to have been offered at auction for ten years."

The manuscript will be going on sale alongside several other Mozart manuscripts, including first editions of his Hoffmeister String Quartet and early editions of three Da Ponte operas.

Click on the images below to see full-size versions of the scores. 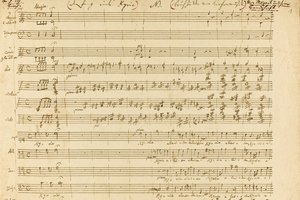 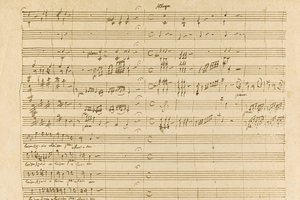