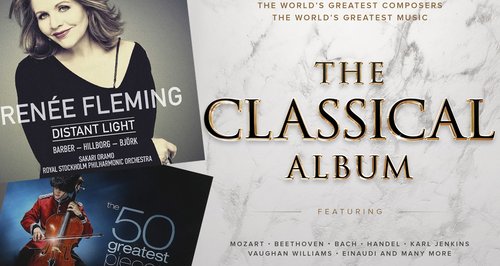 15th January: Last week’s top re-entries The Classical Album and The 50 Greatest Pieces of Classical Music switch around, at no. 1 and no. 2, and Renée Fleming’s new album is the highest new entry at no. 8.

Last week, The 50 Greatest Pieces of Classical Music and The Classical Album re-entered the chart at no. 1 and no. 2 and this week they have swapped places. Meanwhile, Ludovico Einaudi’s Islands climbs four places to no. 3 and last week’s third-place entry Rogue One falls one place.

The highlight of this week’s chart is the new album release from Renée Fleming and the Royal Stockholm Philharmonic Orchestra, which enters the chart at no. 8. The title Distant Light comes from a poem in a new song cycle dedicated to Renée and this is its world premiere recording: Anders Hillborg’s The Strand Settings. This is Renée Fleming’s first venture into the hypnotic world of Scandinavian music and the album also includes music from Björk as well as Samuel Barber.

Renée spoke to Classic FM about the release of her latest album and you can find out more here.

Other new entries include the soundtrack to the new film Assassin's Creed and the Vienna Philharmonic's New Year's Concert 2017, with re-entries from Lord of the Rings: Trilogy soundtrack from Howard Shore and Olafur Arnalds's Island Songs.