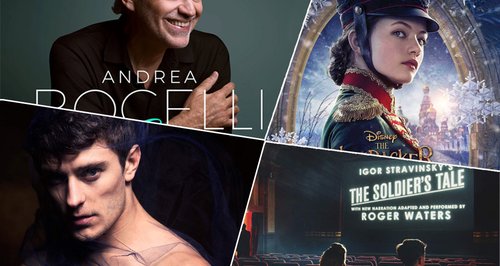 Andrea Bocelli's new album 'Sì' enters at No.1, ahead of another six new releases in the chart.

The Classic FM Chart welcomes an impressive seven new releases this week. Andrea Bocelli's new album Sì features 16 new songs with guest appearances from Ed Sheeran, Dua Lipa, Josh Groban and his son Matteo Bocelli. As past success would predict, his album has entered the chart at No.1, moving Bryn Terfel's popular album Dreams and Songs to No.2.

Sì has also made it to the top of The Official UK Albums Chart – the first time a classical artist has claimed the spot since The Three Tenors in 1994!

Other new releases in the chart this week are Stravinsky's The Soldier's Tale, narrated by Roger Waters, Anima Sacra by counter-tenor Jakub Józef Orliński, Requiem – The Pity of War, The Nutcracker and the Four Realms, and Bach 333, a new collection of the complete works of Bach.