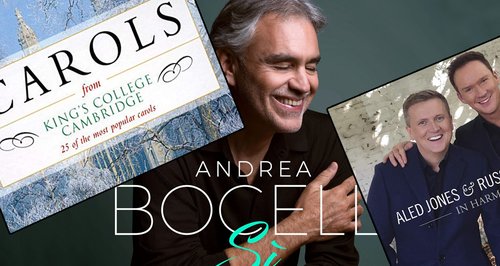 Despite carols taking over the chart, Andrea Bocelli has managed to stay at No.1 in the Christmas Classic FM Chart.

This week's top five albums remain in the same position as last week, with only one Christmas album among them. And for Signore Bocelli and his album Sì, it's yet another week at No. 1 – how else could he finish off such a successful year?

Aled Jones and Russell Watson remain popular at No. 2 with In Harmony, and André Rieu and Katherine Jenkins follow at No. 3 and 4. The Choir of King's College, Cambridge has taken up four of the top 10 places with various carol recordings, and are the most featured artist on the chart by a wide margin, having packed a punch with 11 albums in the top 30.

There are no new entries in the chart and only two re-entries, one of which is Once in Royal David's City by The Choir of King's College, Cambridge at No. 22. The other is the Johann Sebastian Bach piano album by Vikingur Ólafsson, which has jumped back in at No. 15.