Classic FM Chart: André Rieu no. 1 for the fifth week 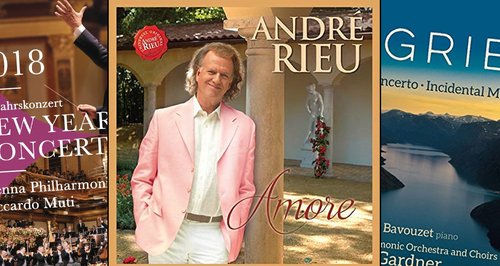 For the fifth week running, André Rieu's Amore holds onto it's spot at no. 1 in the Classic FM Chart, while just behind at no. 2, Music for Mindfulness is up six places. Einaudi's Islands continues to hold onto its seemingly never-ending place in the top ten - this week at no. 3 - pushing Star Wars: The Last Jedi, The 50 Greatest Pieces of Classical Music and In A Winter Light all down two places. Magic of the Violin, also performed by André Rieu is a non-mover this week at no. 7 and One Voice: Believe is also down two places. Finally, Hans Zimmer's soundtrack for Dunkirk is at no. 9 this week and no. 10 is this week's highest climber - Lord of the Rings: Trilogy - up thirteen places.

Last Night of the Proms: The Ultimate Collection, Elements and the soundtrack for The Little Mermaid are all up five places, just outside the top ten. Meanwhile, there are several re-entries in the lower half of the chart - including Einaudi's Divenire at no. 14, At the Movies at no. 15, The Lord of the Rings soundtrack at no. 21, Max Richter's The Blue Notebooks at no. 24 and VOCES8's Lux at no. 26. There are also two new entries this week - the first is Grieg: Piano Concerto played by Jean-Efflam Bavouzet at no 19, then the Vienna Philharmonic's New Year's Day Concert 2018 at no. 23 - which both featured as last week's Album of the Week and Drive Discovery respectively.