Classic FM Chart: Jonas Kaufmann’s ‘L’Opera’ enters the chart at no. 1, while Rami re-enters at no. 7 after phenomenal Classic FM Live debut performance 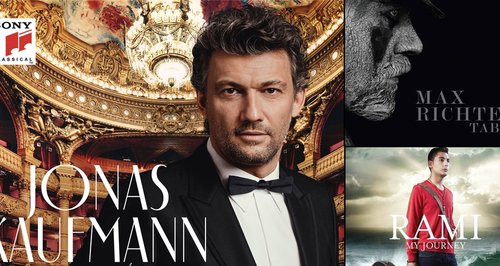 There is a brand new no. 1 in the Classic FM Chart this week from tenor Jonas Kaufmann with his new album L’Opera. The new no. 1 is also joined by two further new entries in the top ten - Max Richter’s soundtrack to Taboo at no. 5 and the new boxset release from Warner Classics of Maria Callas live recordings at no. 10. Thanks to an overwhelming response to Rami’s performance at Classic FM Live, his debut album My Journey has also re-entered the chart at no. 7.

Just outside the top ten is a fourth new entry, Lost is my Quiet. There are a further two new entries at the bottom of the chart this week - Isabella Faust playing Mozart and Nordic Noir. Meanwhile, this week’s highest climber is 2Cellos’ Score, up ten places from no. 30 to no. 20 and this week’s biggest faller is I Love My Love, down twenty-four places from no. 6 to no. 24.