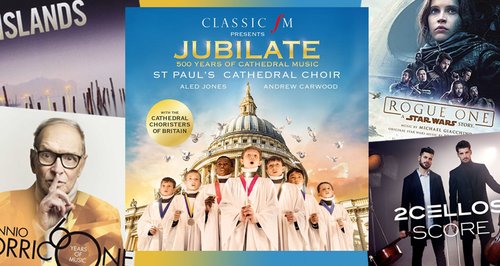 9th April 2017: 'Jubilate: 500 Years Of Cathedral Music' by St Pauls Cathedral Choir and Guests is at no. 1 for the third week in a row after entering straight into the top spot two weeks ago

Jubilate: 500 Years of Cathedral Music is at no. 1 for the third week in a row since it entered the Classic FM Chart. Einaudi's Islands steps back up to no. 2, whereas last week's no. 2 from Alfie Boe is no longer in the chart. A highlight of the top 10 is Morricone at 60, which has climbed up 9 places from no. 13 to no. 4. There is also a re-entry for Classical: The Collection and a new entry from Alina Ibragimova and Cedric Tiberghien playing Mozart.

The other highest climber in the chart equals Ennio Morricone's 9 places - the soundtrack from The Little Mermaid climbs from no. 24 to no. 15. The 1989 film is surrounded by several other film scores, including Gladiator, Lord of the Rings, a re-entry from Fantastic Beasts and Where to Find Them, and not far behind is the soundtrack to award-winning television series, Game of Thrones. The biggest faller this week is Max Richter's Sleep, which drops from no. 8 to no. 23.

Other new entries in the chart include the new release from Marc-André Hamelin playing Medtner and Rachmaninov piano concertos which enters the chart at no. 16, the Nash Ensemble playing Bruch's string quartets at no. 21 and Music For The 100 Years' War: A Brief History In Music & Alabaster at no. 24. The final four albums in the Classic FM Chart this week are all re-entries - including Star Wars: The Force Awakens, The Lost Songs of St Kilda, Karl Jenkin's The Armed Man: A Mass for Peace and Dustin O'Halloran's soundtrack for Lion.