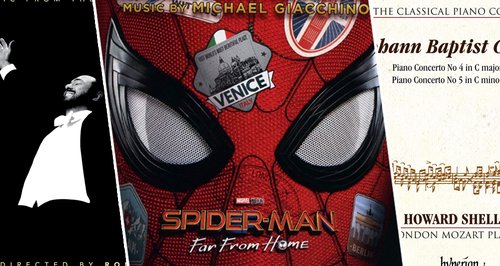 11 of this week's chart entries are occupied by film and TV music, but ‘100 Hits – The Best Classical Album’ makes it to No. 1.

The compilation album 100 Hits – The Best Classical Album jumps up to No. 1 this week, up three places from last week's chart. Staying put at No. 2 is Einaudi's popular album Islands, and Andrea Bocelli's latest album Sì stays at No. 3 for a second week.

Three new entries are scattered across the chart; The official soundtrack to the new Marvel film Spider-Man – Far From Home by Michael Giacchino enters at No. 7, Sibelius' Kullervo recorded by the BBC Scottish Symphony Orchestra at No. 13 and Cramer: Piano Concertos Nos. 4 & 5 recorded by Howard Shelley and London Mozart Players in at No. 20.

Lower down on the chart, three albums re-enter this week. The first is the official soundtrack to the Pavarotti film, out next week, including all of his best-loved performances, the soundtrack to Godzilla – King of the Monsters by Bear McCreary at No. 28 and finally Score by 2Cellos at No. 30.