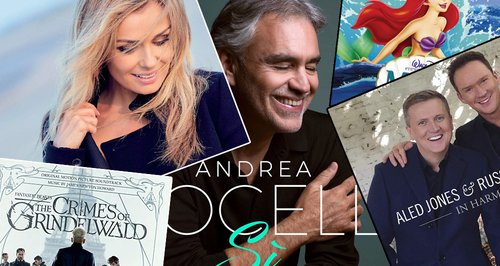 Andrea Bocelli remains undisturbed at No. 1 as we enter 2019, ahead of many chart re-entries.

With the festive season now coming to a close, many carol albums leave the chart this week. They are replaced by a number of re-entries the chart.

The frontrunners remain in a similar position – Andrea Bocelli's album Sì at No. 1, Romantic Moments II by André Rieu at No. 2, Guiding Light by Katherine Jenkins at No. 3 and In Harmony by Aled Jones and Russell Watson at No. 4.

The 50 Greatest Pieces of Classical Music recorded by London Philharmonic Orchestra and David Parry jumps back in to the chart after spending Christmas at No. 10, ahead of another 13 re-entries. Among the re-entries are seven film soundtracks, including The Little Mermaid at No. 15, Spider-Man – Homecoming at No. 17 and Fantastic Beasts: The Crimes of Grindelwald at No. 28.