What does classical music look like in 2015? This festival showed us

At the Bristol Proms we saw the world's greatest performers, enthusiastic tweeting, cheery banter, Bach, and lots of craft beer. And, delightfully, all in the same room.

The wonderful, 18th-century surroundings of the Bristol Old Vic were heaving. There were lots of highlights, but here are a few of the things that made it so special...

Playing Beethoven, in the dark

It's as simple as that. The classical master's epic String Quartet  in A minor, Op. 132, played from memory, in the dark. This stunner from the Sacconi Quartet was all about letting the music speak. Eyes open or closed, it was all you got. (Did we mention it was played from memory? Nice work guys.)

Nestled in Bristol's historic King Street, it was basically Classic FM's home for a week. We broadcast, enjoyed the music, propped up the bar, and just generally hung out hoping to get a glimpse of Tom Morris. The sausage rolls in the café were *almost* as good as their iconic wooden concert hall. Daniel Hope and a Brahms vs Tchaikovsky punch-up

Who would win? Daniel Hope (half violin, half orator) presented a masterly mash-up of the German's String Quintet in G and the tempestuous Russian's 'Souvenir de Florence'. All was punctuated by readings of letters and insults the composer's exchanged (with actor Jonathan McGuinness in assistance) to ensure the invective flew as the lyrical music flowed. (it was Brahms by a TKO, BTW.) We weren't quite sure what to expect with these Norwegian siblings. Curtain up and there's Mari, in leather, surrounded by dry ice, smashing out Bach's epically virtuosic Chaconne for solo violin. Next up it was captivating, inventive new music for solo cello. Sinfonia Cymru then crashed the party along with Phillip Glass, Pärt, Vivaldi and Einaudi. These guys are absolute stars. Always incredible, and she played a huge range of weird brass instruments and wacky repertoire. Including this standard. Nice.

The Sacconi Quartet were at it again, this time all wired up to beautiful wooden devices that responded to the performers' heartbeat while paying, all to convey the intensity and intimacy of music-making.

The young Canadian virtuoso took to the Bristol Proms stage for the second time, since opening the whole shindig in 2013. He's really something, so we thrust a camera towards he fingers and demanded he play Rachmaninov for us (politely, of course).

Purcell, and a pint

You're enjoying a quiet drink on a Thursday after a hard day at work, and then one of the world's finest period music ensembles just charges in and starts playing 17th century court music. THIS IS THE LIFE, EH GUYS? Thanks to the always-up-for-it Orchestra of the Age of Enlightenment and a few accommodating pubs in the centre of Bristol, that's just what happened - and it went down a treat. Epic Early-Baroque pub crawl, closely followed by a heaving Night Shift gig in the Bristol Old Vic's Paint Shop venue. Lovely.

The Bristol Proms' team of social media heroes need a bit of a shout-out here. They were there, standing in the pit of the Bristol Old Vic, tweeting and Instagramming up a storm without fail. If you saw it on social, it was probably from them. Champions.

Classical music's most dashing gent, a guitar, and an enthralled audience. Opera transcriptions, Bach (the Chaconne again - and it was incredible), a bossa nova, sultry guitar classics, and a Beatles tune. And he donned silly glasses for the autograph signing after the show too. What a sport. It was a surprise 70th celebration for the choral music legend, as a polite Q&A with John Rutter turned into an all-singing, hat-wearing, cake-eating birthday party. It was also the time the autograph queue reminded you that (of course) one can like 90s punk rock *and* John Rutter's stunning choral creations. The 2015 festival came to a wonderful close with the Erebus Ensemble belting out Thomas Tallis' epic 'Spem in Alium' - a piece of Renaissance choral music for 40 individual voices. There were also several, stunning, newly commissioned works for the same format. It was very special indeed, and a massive sing for them. They all earned that drink. And you can listen to some highlights right now... 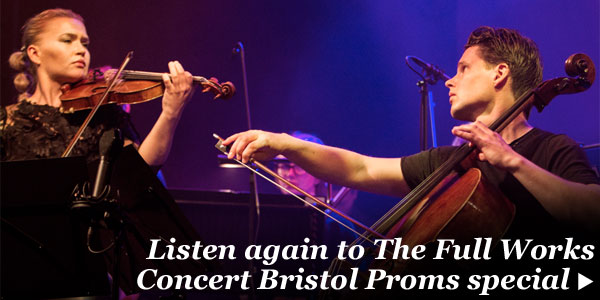