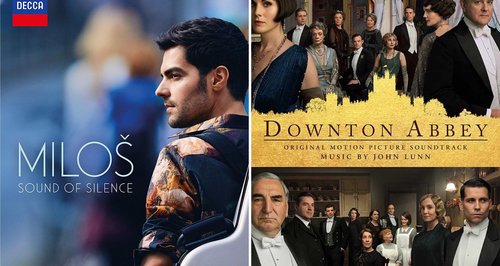 Miloš' new album enters the chart at number one, and the recent release of the Downton Abbey film sends the soundtrack into the sixth position, along with a re-entry of Downton Abbey – The Ultimate Collection.

Guitarist MILOŠ has entered the classical music chart straight at No. 1 with his new release, Sound of Silence. His first recording in quite some time, this collection features covers of Simon & Garfunkel’s ‘The Sound of Silence’, Portishead’s ‘Sour Times’ and Radiohead’s ‘Street Spirit (Fade Out)’ among other crossover arrangements.

Downton Abbey’s cinematic debut last week was accompanied by the release of the Downton movie soundtrack, and this week, that – along with the Downton Abbey: Ultimate Collection – appears in the chart.

Our very own Aled Jones also re-enters the classical chart this week, his In Harmony recording with Russell Watson appearing at No. 15.