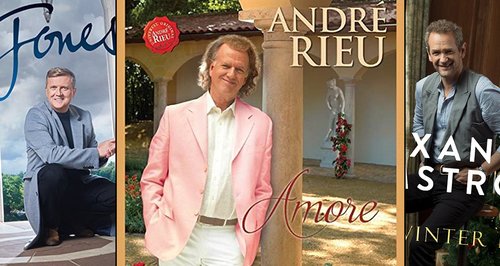 André Rieu’s Amore, In A Winter Light by Classic FM presenter Alexander Armstrong and Aled Jones’s One Voice: Believe are all non-movers in the top three positions this week. The Nation’s Favourite Carol enters the chart at no. 4, with Hans Zimmer’s soundtrack for Blue Planet just behind at no. 5, up twelve places. Canterbury Cathedral Girls’ Choir also enters the chart at no. 9 with their debut album.

In the middle of the chart, this week’s third and final new entry, The Reverend Richard Coles: Songs for Christmas, enters at no. 12. Dolce Duello climbs fourteen places up the chart from no. 30 to no. 16, making it this week’s highest climber. Meanwhile, there are four re-entries in the lower half of the chart - the first Classic FM: Carols with St Paul’s Cathedral at no. 19, followed by The John Rutter Christmas Album at no. 22, as well as Essential Christmas Carols and Christmas at Kings, at no. 25 and no. 26 respectively. Finally, there is a handful of big fallers this week, including Joyce DiDonato singing Berlioz, down eleven places, Justice League down twenty one places and Winter Songs down seventeen places.