Watch Shostakovich playing his own Symphony No. 7 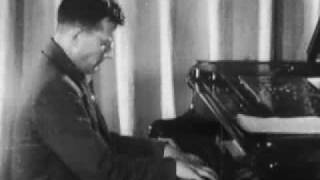 Shostakovich plays a fragment of his 7th symphony (1941)

In this video from 1941, the legendary Russian composer Dmitri Shostakovich talks about one of his most famous works, Symphony No. 7 (Leningrad), and plays a section on piano.

Shostakovich's Symphony No. 7 is one of his biggest, longest and most famous works. He dedicated the work to his hometown, the city of Leningrad (St Petersburg), after it was invaded during World War II.

In the clip, Shostakovich talks about how the terrible events of 1941 inspired him to write the symphony, and the work is now regarded as a major musical testament to the estimated 25 million Soviet citizens who lost their lives during the war.

The influence of the war is evident in Symphony No. 7: the first movement, which he plays in the clip above, was originally called "War" and includes a rousing string theme; a march which is repeated 12 times, louder and more accented each time; and an "invasion" theme.

Meanwhile, the second movement was originally called "Reminiscence" or "Memories", the third "Home Expanses", and the fourth and final movement "Victory".

We've just lost the cellist who gave us this unbelievable performance

The Unsettled Scores Of Dmitri Shostakovich