A Minute with Nick Bailey 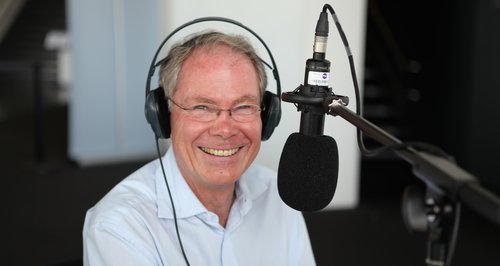 Nick Bailey's was the first voice heard on Classic FM when it started broadcasting on 7 September 1992. Spend a minute finding out more about this globe-trotting broadcaster.

If you could sit down and have a coffee with one great composer, who would it be?
NB: Handel. Apart from the fact I played Zadok the Priest as the first piece of music on Classic FM in 1992, I'm a great baroque fan and prefer Handel to Bach. I would also be fascinated by his life in London when he was living in Brook Street and as we're having a conversation in 2013, I could ask him how he got on with Jimi Hendrix, who lived next door.

Who was your favourite ever interviewee or guest?
NB: The Duke of Edinburgh. He came into the studio while I was presenting and I loved his no nonsense approach. He said he did listen to the programme on occasions but asked me if I could change the introductory music because he was fed up with it!

Who would be your four perfect dinner party guests?
NB: Fletcher Christian, William Bligh, Marie Antoinette, and Mary Berry. Christian and Bligh were both involved in the mutiny on the Bounty, and Marie Antoinette famously said "Let them eat cake" during the French Revolution. And as both events took place in 1789 there would be no confusion with dates. As for Mary Berry - she would make the cake!

What was your most embarrassing on-air moment?
NB: When I was working for the British Forces Broadcasting Service in Hong Kong a typhoon hit but I kept broadcasting all night. It was only the next morning that I realised the transmitter mast had snapped off and nobody had heard me!

What was your first pet?
NB: A white mouse at the age of ten which died within a few weeks. I've been wary of pets ever since.

What’s your guilty pleasure?
NB: Eating maron glacés at Christmas because they are SO expensive.

If you could be a musical instrument, which would you be?
NB: The accordion. I would like to be played by a busker under a bridge in Paris.

What was the most memorable concert you attended?
NB: Ludovico Einaudi on his Nightbook tour.

Which superpower would you like to have?
NB: I would love to have the freedom of a bird. So, flying.

What's your favourite snack when you're feeling a bit peckish in the Classic FM studio?
NB: I deliberately don't bring anything in with me but I hoover up anything left by other presenters. I once went through a whole pack of Liquorice Allsorts - but don't tell anyone.

What ambition are you still to fulfill?
NB: I want to travel to Pitcairn Island, where the Bounty mutineers settled.

What is your all-time favourite piece of music?
NB: Sympathy for the Devil by the Rolling Stones.

And your all-time favourite book?
NB: A Town Like Alice - Neville Shute

And film?
NB: The Third Man